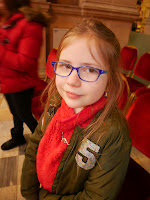 Kids really crease you up at times. Amaia's topic at school at the moment seems to be something to do with nature and living things so she's developed a sudden interest in worms - to the extent that she filled a lunchbox with earth and worms and took them to school today! I made the mistake of asking why she found worms so fascinating:

"Well, worms are just amazing - did you know that is you cut a worm in half, it doesn't die, you just end up with two worms instead of one! Technically, if you were a worm you could actually marry yourself! You could have a wee ceremony and the person in charge would have to say something like 'Do you bottom, take you head to be your husband?' And then each half of the worm could say 'I do!' 😂"
Posted by Phyl at 7:09 pm