I'm wondering if there's much point in me blogging this given my other half already has, but I guess only having our communal friends knowing what's going on might result in a few strange looks a week/month or two down the line.
For anyone who knows me on Facebook, it'll come as no surprise to you that I am not the biggest fan of Brexit - unless of course you've missed my four ranty posts a day for the last two years.

When the UK voted Leave back in June of 2016, I wasn't as horrified, in retrospect, as I should have been. That isn't because I was lukewarm to EU membership, but more because I'm so European, I think of the EU as 'us' and the UK as 'them', so my initial assumption was - the UK will hang about the periphery, sulking for a few years while 'we' get on with business without 'them' sticking their oar in in their usual petty and annoying fashion all the time.

Given I had assumed Norway was the worst possible route a sane government could opt for, I didn't think it would have much of a negative impact on my life or family... Then came May's red-line speech declaring that we'd voted to leave the Customs Union and the Single Market and ditch free movement and a host of other crap, I for one didn't see on the ballot paper - maybe we got the abridged version up here in Scotland?

Within hours she'd scathingly branded me, my family, and most of our friends as 'citizens of nowhere', rather than as we tend to celebrate 'citizens of Europe'; citizens with family and friends everywhere. For thirty years I had celebrated our diversity, our mixed culture and the many languages we use at the dining table every day in life. I loved that all my kids could fluently speak two languages and had two passports each. But suddenly the person in charge of the country where I lived, a narrow and insular excuse for a person, was telling me the way I had lived my life since I'd met my first foreign boyfriend at sweet 16, was illegitimate and no longer tolerable. My type of family was to be stamped out going forward. Would a day come when instead of proudly teaching their classmates a few words of their other mother tongue, they'd have to hide their foreignness? Would they have to drop their foreign surname from their CV later in life to get an interview?

Alarmed doesn't come close to how I began to feel in the autumn of 2016. And still, I had fully underestimated the madness that would follow. Early on, we started to discuss our own red lines, Thomas and I. If freedom of movement was to go, then families like ours would also probably have to go, in our eyes. We figured the latest it would become obvious, what the government was actually working towards was December 2017, so that would give us fifteen months to come up with a workable plan. I'd lie awake in bed for hours every night analysing what the likelihoods were. December 2017 came and went, with our kids clued up enough to be asking all the right questions about what the UK was aiming for, but strangely though they knew the ins and outs, the government didn't seem to. Senior politicians embarrassed us by trying to negotiate with EU countries separately, not grasping the fundamentals of how the EU even works, after 40 years membership! They were completely blasé about any effect this could have on peace in Northern Ireland and downright outrageous in their complete disregard of the Scottish 62% (and rising ever since) pro-EU vote.

Every deadline was missed and EU families like ours waited and waited for clarity, pawns in their grotesque game. I got to the point where I had to turn the news off as it was making me feel physically sick.

By Christmas of 2018, I had been through my own rather huge trauma; a cancer scare. When finally I got the all clear, the only woman on my ward who did, I knew we had to take back our future. Not having to go through the chemo everyone else was faced with meant that other than trying to recover, I could move on. I had spent too many sleepless night worrying about whether we could stay together as a family, about the state the UK economy, the NHS and the Higher education system would be in by the time my three youngest hit adulthood.

I could see Brexit was going to be dire for my company. Thomas works as an IT and linguistics consultant, so his work would dry up quickly in a recession - why pay to make people redundant when you can simply drop the consultants who have no employment rights? My work had been a bit precarious as I'd been off sick (though unpaid) so I was clawing my way back up that hill. All my foreign work had been gained on the basis of my running an EU-based consultancy. By March 29, I would no longer be running an EU-based one, but rather one floating on the edge of the EU with no obvious guidelines to follow. That would make it close to impossible for our company to win any EU contracts we bid on going forward. And of course, given the falling value of the pound, the EU work I did was the most lucrative of all. We estimated at least half of our business would dry up because of Brexit and that wasn't the kind of hit we could take.

Out of the blue, Thomas saw a job ad for a senior IT linguistics post in Denmark - the equivalent of heading up the IT section of the Académie française, but in Denmark. We agreed it was a lifeboat worth applying for, just to have on standby in case the government was insane enough to let the country crash and burn. Of course, when he applied we assumed it would remain a parachute, tightly packed under our seat because no sane Prime Minister would take a country to the edge of the abyss just to stop her party falling apart...

So there we were with 28 days to go and an ultimatum - sign up for the Danish lifeboat or risk staying in the UK, where Thomas's rights to healthcare, his continued right to have a mortgage here, or his right to remain, should he lose his job had not been guaranteed by a government so openly hostile to foreigners that they were deporting Windrush grandparents who no longer remembered coming to the UK as toddlers. Had we been a fully EU couple, like many of Charlotte's uni lecturers, we could have waited to see how bad things got and then decided to leave after Brexit, but I am the sticking point... six members of my family can leave after Brexit, but I become landlocked in the UK once my freedom of movement is removed, be that at 11pm in 22 days time, or after transition in December 2020, should they sign some last minute version of May's catastrophic deal next week.

It's isn't what we would have chosen to do. Thomas moved to Scotland, learnt Scots and feels Scottish. We never expected to feel so insecure in our home that we'd feel our only option was to flee the country, but that is what we have decided to do.

I have good days where I am almost excited at the prospect of living on mainland Europe, (well on an island tethered to the mainland by a bridge at least) and being able to drive all sorts of cool places for the weekend. And I have other days where I shake and cry and hide under the duvet as it is all too big to contemplate. I'm old, too old to start my life again from scratch. Removal costs are so high we are having to give away most of what we own and start again, without so much as a bed or a couch. We're going to have to sell our cars and house and transfer the money abroad, potentially as sterling crashes to a point where we can't make enough to buy a home there. We're having to magically find £7000 from nowhere to cover forcing Charlotte into University halls for a year - we can't exactly put that on her shoulders when she didn't choose this fate. When I think how long it will be before we break even I'm terrified and that's before the sadness hits of dragging the three wee ones out of schools we know and love, away from their dear friends. Marcel and Charlotte both came top of their high school year at one of the top three state schools in Scotland, and the wee ones have that same potential. Is it fair to plunge the wee ones into a system they don't know, in a language, that of course they speak, but not to the same standard as they speak English? Hopefully they'll learn to fly.

But if the economists are right, we're taking them away from a recession that will overshadow the remainder of their childhood, to a country everyone always says is one of the happiest of all. The work life balance will be better, the houses cheaper, the higher education free... It's been a hard choice to make, but I feel our hands are tied, so Denmark, it'll have to be. And when you decide to do something, there is no point in feeling sorry for yourself or dragging your feet. I'm going to find a way to do this well and make the best of a situation I didn't choose. I'm going to come home as many weekends as possible to help Charlotte, mum and my brother cope with this change and I'm going to hope as many of our friends and our kids' friends feel like a visit over the next few years as possible - maybe just to visit us or maybe because we'll be close to the original and definitive Legoland. Some of you might decide to come so you can have a meal that doesn't contain chlorinated chicken and rat poo or just to feel European again... I genuinely mean you are welcome - or will be once we have somewhere to stay. I've lived abroad before so I know it isn't always the most obvious candidates who drop by for a visit - but what I do know is that it is always fun when they do!

With still no clarity of Remain/May's Deal/No deal and now only three weeks to go, all I know is I'm moving to Funen either some time in the next two weeks or some time before the kids finish this school year. It's shocking to still have no clarity when you're this close to the precipice. 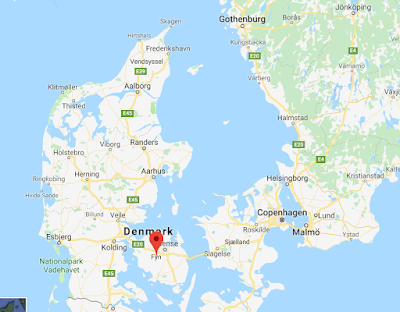 But to a certain extent, it feels good to regain control of my future after 984 days with the clowns in charge of the circus.
Posted by Phyl at 5:46 pm