A tiny glimpse of her foreignness

If you never see my kids at home, or with their dad, or grandparents, you could be forgiven for not realising they aren't your average Scottish weans. They've always lived here, there isn't even a hint of foreignness in their accents, and rarely in their turn of phrase. It's only if you hear them with their dad, that you realise they actually spend half of their time at home in another language...

But every so often something gives it away, whether that is referring to December 24 as Xmas, or having friends round to beat up piñatas for no apparent reason on the Sunday before Pancake day, or whatever. Today was one of those days. We're trying to eat our way through the kitchen so we're having strange dinner combos at the moment. Tonight we found Ikea meatball sauce but no meatballs, so Léon improvised with a links sausage and a square sausage each. I suspect most nine year old Scottish kids would know what that was called, so I had to laugh when Amaia came out with the throw-away line - 'I definitely prefer square sausages to cylinder sausages!' I don't tend to cook sausages, so she's probably only ever heard them discussed in Danish before, but today Daddy's not home, so she had to find a name for them in English. 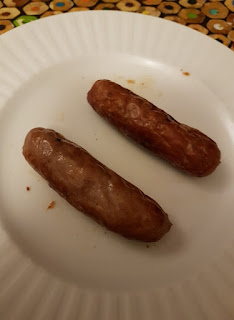 Henceforth, I will always refer to them as cylinder sausages. 😁
Posted by Phyl at 9:38 pm