In our family we celebrate 'half birthdays'... It's not my side that came up with it but Thomas's - I presume it dates back to their childhood. Both Thomas and his sister have winter birthdays (February and January, respectively), and given their parents used to take them off to their Italian summer house every year, the kids sneakily came up with the idea that if they had half birthdays, they'd have a great excuse to beg two Italian gelateria trips during their summer break.

Given five of the seven of us also have winter birthdays between December 19 and February 8, it didn't take too much arm twisting to continue this tradition into the next generation. Marcel was born on July 27, so his half birthday has never been much of a highlight to be honest, but his real birthday often involves ice cream, foreign climes and beaches so that's ok.

Léon is as European as a child can be. Genetically he's Scottish, a tiny bit English, and he's also a quarter French and German. He has been brought up since birth by a Dane, so is culturally Danish. He's top of his French class, he's a fluent Danish speaker, he can even get by in Italian and is about to start German and Spanish. His favourite place in the world is Italy, where he spends up to six weeks at a time, roaming the Italian mountains with his band of little Italian friends: Aurora, Viola and Alessia. He has aunts and uncles in Denmark and France, a sister who spends the most part of her free time in Spain. Léon started watching subtitled movies at about eight and spends his Saturday nights steeped in Icelandic thrillers, Spanish series and similar. He's even picked up a lot of Swedish from watching 'the Bridge', and often speaks to me in Swedish on the school run just for fun, driving both Anna and Amaia mad... But there's a problem: Léon was born on September 29. About 18 months ago the horror struck him in all its glory. Fucking Theresa May hadn't just triggered article 50, devastating the whole family, she'd triggered it to run out on March 29 - Léon's half birthday!!! 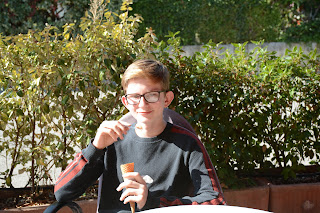 As we've been approaching the date, few families have been as affected by the whole thing, as ours. We've decided to emigrate because of it, so you don't get much steeper than that, but on top of that, celebrating in any shape or form on Brexit day would have been anathema to us.

Léon's face, last week when the EU stepped in and saved the day (even if only by two weeks) was truly something to behold. Looks like Friday's ice cream might just be back on after all!