Teeth and toes: a question for the musicians 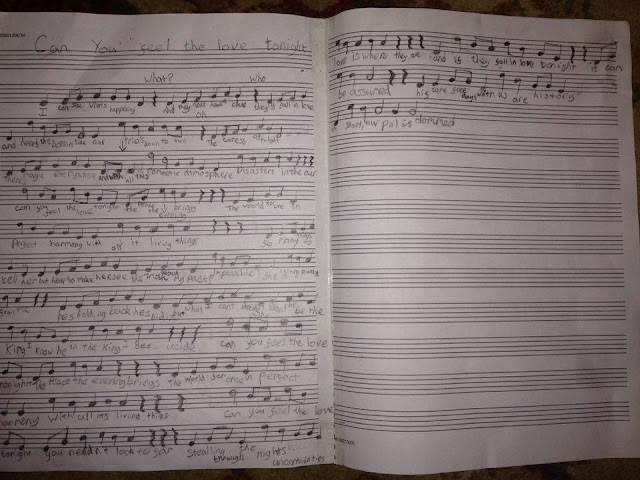 I am not very musical. I mean, I enjoy singing along to the kitchen ipod while I am doing the dishes as much as the next man, but my ability to read music and play an instrument is almost nil. I don't even have the excuse kids have today that they didn't learn anything; music reading and recorder playing were compulsory in my day from the age of 7 to the age of 13, so I had ample opportunity to learn to read music, I was just crap at it. Given a whole day I could sit with a piece of sheet music, reciting Every Good Boy Deserves Favour over and over and writing it down, or even count the spaces as FACE but as for reading it at the speed you were meant to - no chance and the difference between wee coloured-in notes and wee blank ones, not a scooby...

So it never ceases to amaze me that Léon has managed to learn to play the violin. For a while, I figured he was ok, because his teacher was ok, but over the last year I've noticed he seems to actually know more than he's meant to. He decided to play with a couple of girls from his class (who have been attending the same music lessons). One day he mentioned that while they could only play with sheet music, he could memorize tunes after playing them just twice so didn't need to bother taking his music with him. I was well-impressed. I did, after all, take five years to learn Silent Night on the recorder (and can only play the chorus). I then found out that while the others bought music they wanted to play, Léon simply asks you to sing him a tune and then he can play it back to you. Recently because the school didn't have the sheet music for Lion King, he was asked to write it out for them, as he had taught himself to play it from listening to the movie. Then the others in the school could join in too. He was extremely proud when the head singled him out for special praise for having written the score for the show. I know this simply sounds like a bragging post, but you know me, I don't do bragging...

So there I was sitting yesterday in the living room, when he confided in me. 'Mum, do you know how I can write the music for the shows when the others can't?' Of course I didn't! So he went on to explain. 'I practise the music all the time when I don't have my violin here' Well that blew my mind to start with! How can you practise a song till you get the notes right, without the instrument you are playing the notes on? He grinned and pointed to his teeth. (Curiouser and curiouser). 'See my two big front teeth? I imagine them to be the first two strings, then I skip a tooth because of the spacing on the violin and use the next two.' Use the next two? What the hell does that mean? 'I play my top teeth by touching them with my bottom ones. Because I know what the notes sound like I listen to them in my head till I get it right and then I can play a tune straight off, no errors'. WTAF??? I must have looked dubious because he continued 'When I don't have my socks on, I can play the carpet with my toes too! And when I am sitting at a table, I can strum the table with my fingers. Because I am right-handed, I do it with my right hand, so that means I could play the tune on my violin with either hand, although I'm meant to use the left one!' Well blow me away! He hears the notes in his head when plucking invisible strings on his teeth and toes!!! I am gobsmacked. So here's my question to the more musical amongst you (ie the professional musicians on Thomas's side of the family!): Is my kid a weirdo, or do all musical people play silent musical notes on their teeth or toes till they get it right? In other words - is he normal or should I be saving up for a therapist/strait-jacket already?!
Posted by Phyl at 10:59 pm