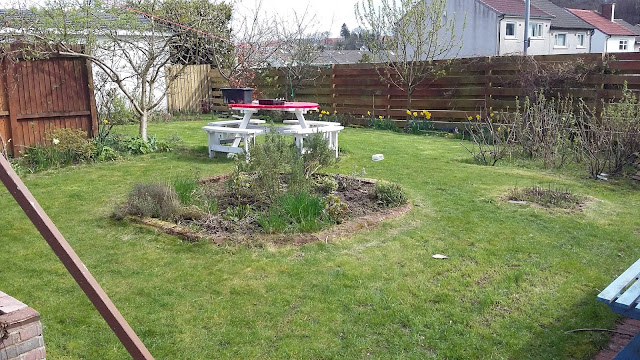 Thomas cut the grass for the first time last weekend. I cut the edges. As I stand in the kitchen looking out over my garden, everything looks so familiar. I've lived ten years in this house, the longest I have lived anywhere other than with my parents during my childhood. The spring flowers are in bloom everywhere... And yet I feel like a spectator looking at something I find hard to recognize. It looks like my garden, it feels and smells like my garden, like my garden always looks. Yes, there are more spring flowers because every year I plant another few bags full, but otherwise nothing has changed, and yet it feels as if everything has changed. I struggle to recognize the world around me. Someone has taken it and flipped it on its head. The unimaginable has become boring and mundane. Just when you think nothing can surprise you any more, things take a new dramatic turn... The lunatics have taken over the asylum, and I for one am no longer feeling bien dans ma peau.

That's how things are in families like mine - some phrases and idioms come to you more readily in another language than your own. We are mixed-up citizens of nowhere and citizens of everywhere. A multiprise will never be an adjustable spanner, clous de girofle took many years to become cloves for me and although I know contreplaqué when I see it, I'm never sure if the English is chipboard or plasterboard.

And the languages and dialects are multiple - I grew up speaking only English, but of course my parents and more strongly, my grandparents spoke mostly Scots so from as early as I can remember I've been filtering more than one set of vocabulary on input and changing it for output. Uni brought French and German, then Italian and Swedish. After that I learnt the German dialect from Saarland - my first mother-in-law did try to speak to me in Hochdeutsch but always forgot a sentence in and so Kartoffeln slowly became Krumpe (though I've never written it down so I'm not sure of the spelling), a Hose became a Buks and that list became much longer than my arm - Mein liever Mann! Next up came Danish, of course and simultaneously with that came some more Swedish, some Norwegian and of course Schwäbisch (although my father-in-law doesn't speak much of it in my presence, it is Thomas's native form of German so can't be avoided.) We've just finished watching all three series of Die Kirche bleibt im Dorf (highly recommendable but beware the title is the only bit you'll understand if you only do Hochdeutsch!)

We dabble with little bits of other things of course - we went through an Icelandic phase a few months ago where we tried to guess how many words we could get without the subtitles and we actually spend our Saturday nights playing other similar games. We often find some Icelandic word strikes us simultaneously as cute while watching a drama and we turn to each other and ooh and aah in a way that is possibly inappropriate to the gruesome victim of a crime that is being uncovered as we smile at the words. We analyse cases and tenses and word order as we listen to the unknown - of course Thomas has a hell of a head start having both linguistics and old Norse but I can hold my own trying to follow Icelandic all the same - I know which questions to ask and he knows the answers, which kind of makes us the perfect couple - perfect for each other anyway, as no one else would want to spend their Saturday nights watching Icelandic snowstorms while analysing the genitive form of personal names!

There has not been a day for the last 32 years where I have not heard more than one language at home. I know to many people that makes us freaks, but it is the very essence of who we are and that is why the current political situation feels like it has cut us adrift and left us floating in a limbo where we've lost our identity. If the 23rd of June felt like a vote to invalidate the lifestyle we have chosen, May's ever-increasing right-wing agenda feels like an annihilation of everything we hold dear.

We are multicultural, multilingual, we embrace diversity. It almost feels like May has a window into my soul and she's attacking everything that makes me who I am. Leaving aside the appalling treatment of EU citizens who have lived here decades, who are the parents of UK children; their being hung out to dry and treated with contempt on a daily basis (that is a whole blog posting in itself), the things that matter to me are making sure there is health care for all, a net for people who fall sick, care for the disabled, help when people lose their job (even after they have had their third kid!) We now have unqualified administrators quizzing women about rape here in the UK, ffs! When 90% of rapes are never prosecuted, how few people will be able to claim help for their child, and how many victimized women and children will simply be pushed into poverty? It feels like we're one step from third kids having to wear some sort of symbol denoting they are the result of rape just to get a free school lunch and that makes me feel sick to the stomach. She wants to drag us out of the single market leaving us free of any trade deals for up to a decade when the country is at breaking point through her party's austerity measures. People voted for this because they were desperate and they believed the lies - when their situation becomes worse rather than better, we'll have riots. Her recklessness terrifies me. She wants to roll back human rights and environmental protections, she wants to court Trump and every dodgy Saudi Arabian arms dealer. She wants to invest billions in WMDs when there are children and pensioners who can't afford food and heating. She wants to bomb Syria then refuse asylum even to unaccompanied minors. It beggars belief. God knows my house is full but I'd have them here under my roof if it could help them - they're simply people who, unlike me, have not won the postcode lottery of birth. The bottom line is that everything I believe in is diametrically opposed to what the current government is pushing and now she's called an election to increase(!) her number of seats as the people of England seem to think she's by far the best thing on offer. Look at that list. This is the best thing on offer!?

I am actually incapable of understanding how anyone could think like that. When you remove free health care, you are saying that there are circumstances when it is ok to refuse someone treatment on the grounds of their income. It becomes acceptable to say 'You don't have enough money so we are willing to let your child die of a curable illness.'  I cannot comprehend that. When you remove people's rights to claim tax credits for a third child, you are saying it is fine to have number three starve if you lose your job. They claim it is to deter poorer people having a third child but when I think back to my own situation, my household was earning over £100K (and had paid many, many years of tax) when we decided to have number three. Under those circumstances, a third child is a valid and fairly uncontroversial option. I was not to know that a year later I'd be separated from the father with an income cut of 80%. I would love to know where it is the Tories think you can take the kid back to when hard times hit? Their world is very simple, but the real world isn't as black and white. My list of questions is endless. I would like to ask why as the mother I can't claim tax benefits for my number three but my ex-husband can start a new family and claim for two more new kids? I'm allowed two but my ex-husband is allowed four - hmmm. I would like to ask why my second husband, who had no kids, can't claim anything for his first two kids because he is forced to take on the financial responsibility left behind by the father of my first two? Realistically the very bottom line is that no one should ever have a third child even on over £100K because these days circumstances can change. Someone can be made redundant, fall ill or die crossing the road - oh yeah I forgot she's cut widow(er)'s allowance too. This is the best option, really? I feel sick and disgusted.

I feel an ever-growing desire to run as far away from the UK as my legs will carry me and never ever return.