One of the main problems of working for yourself in a freelance-like capacity is visibility. Although work is not dire at the moment, we are both receiving fewer hours than we'd like and have no visibility beyond the autumn so we need to stockpile our earnings rather than spend what we earn. That means that although the microwave isn't working, we don't buy a new one. It means that although the mattress on our bed has springs sticking out of it, we have lived with it for the best part of two years. Although part of the facade of the house has cracked and fallen off, we are going to attempt to fix it ourselves. Although we needed a seven-seater car when our old one blew up in January, we bought a four-seater because it would do and so on. But most of all it means that when life is at its most stressful (imagine six years of not knowing where your next month's salary will come from when you are responsible for five children!) and you need a night off, a night out, a trip to a café or cinema or, most of all, a holiday, you resign yourself to another year without. Although we have visited relatives, you tend to do that when you have foreign ones, Thomas and I have been on just one holiday with the kids in nine years and that was driving about England with a tent that was too small for our family cooking on a camping gaz stove to save money! And together, we've only been away two nights without kids in that time! Those include one night in Rome in 2007 when my ex-husband babysat, so I couldn't sleep for worrying! And one night this year in Perth at a political conference when my seventeen year old babysat, so I came back as early as I could to see he'd managed ok without me!

It is strange to think that the whole of the little ones' childhood may pass without once doing what we naturally do. I think that when this situation began we assumed it would last a year or two, not a decade or more. My little ones will not know what kind of person I really am - they won't know I love to sit at a café and watch the world go by, because I never take them to a café. They won't know I love the sea. I've never taken them on a beach holiday so they'll probably assume I am not! I've taken them to France just once (on a business trip) despite it being my other home. They don't know Thomas is a great lover of Spain and a fluent Spanish speaker because they have never been to Spain. They rarely see us foraging our way through a European vegetable market filled with excitement. There's a whole world out there and not getting to see any of it is so frustrating. My children never see us heading off for a city break, so probably think we're not travellers and yet travelling has always been my whole life. At fourteen, I sold my bike so I could go to visit my German penpal and from that moment on until the recession my life was spent on and off trains wearing a rucksack. There is never any respite from the stress of our daily life. 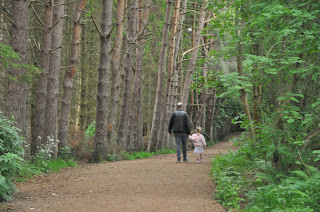 So faced with the depressing thought of a summer day trips where I have to leave at least two family members at home, or drive everywhere in tandem, I have decided to attempt a positive approach. I am going to try to pretend I am a tourist on holiday in Glasgow! We started last week with a trip to Chatelherault country park and this week, when the temperature hit a staggering (for Scotland) 30 degrees, we took a train into town and went for a walk around Glasgow Cathedral and the Necropolis. If we try to drag all kids out at least once a week to somewhere we have never, or at least rarely, been and look at it with tourist eyes, we might even be able to convince ourselves we've had a fun summer.

We can try at least. Let's hope the weather doesn't let us down. 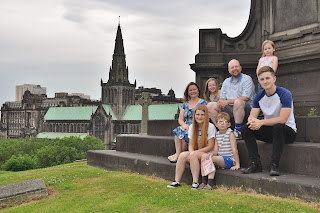 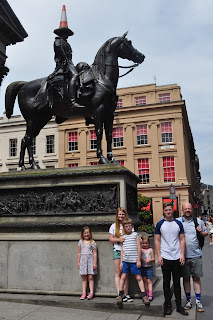