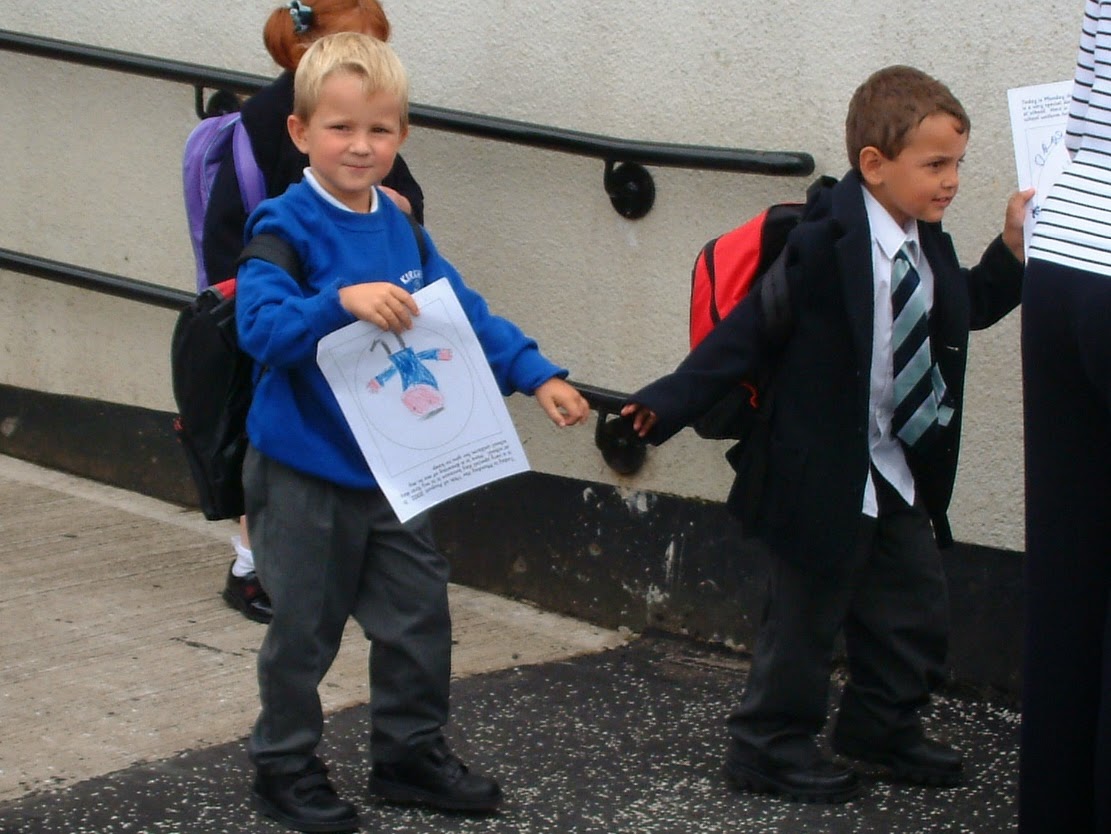 Marcel and Gregor leave school after their first day of p1.


Marcel has left the building!

After nearly thirteen years at school, Marcel has finally left. It's strange to watch schooling from a parents' rather than a child's perspective. I feel like my own school days took such a long time, but it's not like that when you are the parent.

I remember taking the photo above as if it was yesterday. I even remember what I was wearing that day and the warm breeze that caught my skirt. I didn't feel overly tearful sending him in to school on his first day as many parents told me I would. For one thing he'd been at nursery before that, and he was so wee and eager to learn. I also knew I had another child at home. I am dreading taking Amaia in on her first day this August though as I have never done that thing that almost all my fellow parents have had to do - taking the littlest one in to start school. When I took Charlotte, I was already pregnant with Léon, with Léon, I had two babies at home, and so on. I have never walked my last one through the school doors before, so maybe that will feel different.

I do admit however that I cried at his primary graduation. Primary school had been home for seven years. It had been the only stable element during a difficult few years that had seen my marriage break down and me move home twice. Of course, the primary teachers (in all their evil relish!) had taught the kids some song about moving onwards and upwards to achieve their full potential that managed to turn every last one of us to mush instantly! I knew I would be losing a part of my child then as all the mums of older pupils were positively thrilled to tell me that once they go to high school you never see them again. Of course, that wasn't quite true. I suppose to a certain extent they meant you passed in the house without touching base nearly as often. Suddenly you were no longer arranging his sleepovers and play dates, you were being called and asked 'Can I stay with X tonight, we're playing Fifa'? Of course unlike in primary days, you no longer knew X or X's parents, or you knew them vaguely, they were from a different primary but turning up at X's door to check you approved of his parents would have been seen by your child as an affront. My own house started to feel like Central Station as numerous nice wee boys camped out on my couches. So you did your own detective work, kept one ear to the ground in case there was somewhere you really ought not to want your kid spending the night and you started to back off and trust their judgement. You no longer knew where they were 24/7 - they were too old to follow round the park. You had to assume you had brought your child up well enough for him to choose the right places to be and the safest people to be with. 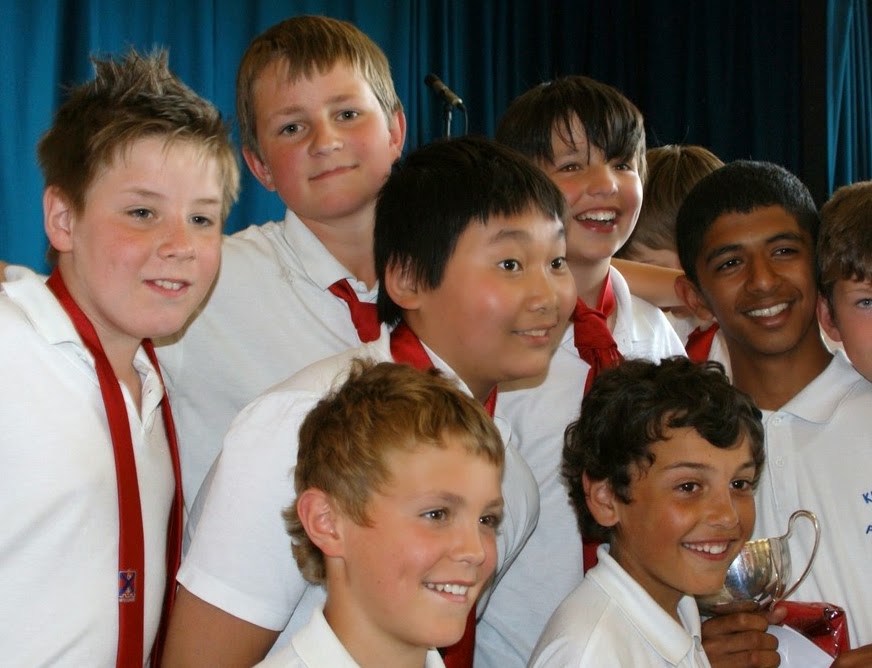 Robert, Marcel, Matt, Gregor and others at primary graduation 6 years ago.

We decided early on that if we made family dinner round the dining table compulsory, as opposed to nodding to him and allowing him to shoot off to his room with a TV dinner every night as I saw many of his contemporaries doing, we would always manage to maintain a feel for if he was ok without needing to interrogate him in an overt and intrusive manner. That worked for us. Touching base in a natural setting meant I felt I knew him well enough to trust him and he, in turn, trusted me with many truths I knew other parents were not quite as lucky to get. So high school didn't mean I lost him, it meant I got to watch him grow and mature with just about the right mix of freedom and responsibility.

He excelled at school - the only child in his school to have achieved 7 Highers and one Advanced Higher by the end of s5 (7 of the 8 at A grade). He took to debating and public speaking with great relish and showed great talent in his main love: creative writing.

Next year he'll be studying Law somewhere, though he hasn't narrowed his choice of where down yet (next week is the deadline so we are all watching and waiting!) 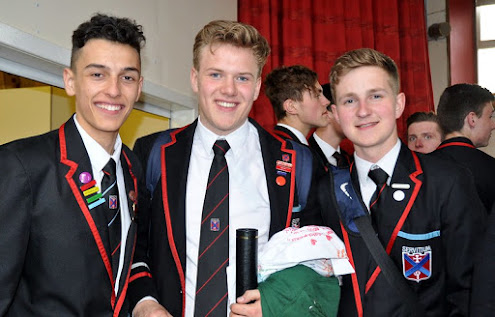 Gregor, Euan and Marcel leave school after their last day of S6.

And so yesterday, I watched as nearly 200 kids, at least 50 I'd known for 13 years, walked up and got their scrolls, their hoodies and suchlike, but more importantly I was suddenly aware of the adults they had become. Young people with the confidence to give the speeches, sing the solos, recite the poetry and conduct the ceremony itself. I was watching the tiny infants of yesterday, fully grown and ready to walk out into the world. They were so mature, capable and confident and I thank Mearns Castle for making them the wonderful young adults they have become. I can't believe I still have another 13 years to go before my last one walks out the gates. That's probably a record, but in a way I am glad my journey isn't finished yet, even if Marcel's is. I have no doubt the bunch of kids I have just watched for the last 13 years will go on to be amazing people and I wish them all, all the luck in the world.

And remember Marcel, Ross, Andy, Euan, Matt, Scott, Truesy, Deeno and Robert - I've driven you so many places in the big old blue bus you did all promise me on several occasions (though possibly in a tired and emotional state) that you would look after me and drive me everywhere when I'm a pensioner - I'll be waiting!
Posted by Phyl at 2:46 pm