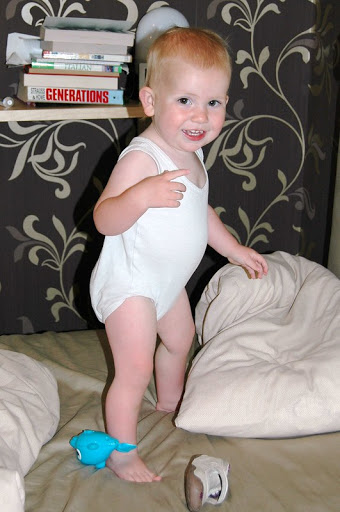 This one has been an oddball since she popped out 17 months ago. First there was no explanation as to why she decided to weigh 25% more than all my other kids. Then at 7 months she started that weird bum-shuffling thing and because the technique allowed her to move things around freely, it looked until yesterday like she would never attempt to move on. Suddenly she decided standing was the first step, but not standing on the nice smooth, hard, even floor, as would be sensible. If you want to learn to stand, how about on the edge of a couch or on the squashy mattress of her parents' bed?
Posted by Phyl at 11:31 pm