NONSENSE FROM DAWN TILL DUSK 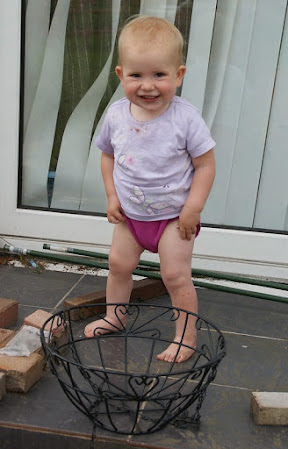 This one really is a special little troll. I don't know why so much nonsense goes though her head - it isn't malicious at all, partly it's investigative, but sometimes she's just trying to act like the older people she sees around her.

Today was fairly typical. We got up to find she'd taken all the bowls out of the Welsh dresser. She likes to colour in bowls when you turn your back. Obviously finding out she's chosen oil pastels instead of washable felt tips five minutes before breakfast is a bit of a bummer.

I washed the bowls in the sink and walked past the downstairs toilet as I went to put them on the table. She was standing unaided beside the loo. She carefully removed a square of loo roll with her left hand, transferred it to her right, wiped her bum (she was wearing a nappy and tights) and put the used paper in the loo. Ok, she'd been watching the rest of us at the loo. She repeated this with a second square, and a third, and would have done the same with the entire toilet roll, had a I not dragged her out kicking and screaming.

She crept through to the hall. She didn't immediately see her shoes in the shoe cupboard. She put on one of Léon's and wandered away. I found it in the living room. As I was returning it to the shoe cupboard so we wouldn't be in a panic Monday morning at 9, she passed wearing one of Anna's! I pulled it off too and said no sternly. She rolled dramatically on the floor, heartbroken. Five minutes later, because I'd closed the shoe cupboard she hobbled by wearing one of Thomas's large muddy garden clogs that he'd left in the porch! Arrrrg! Stop it baby!

Other than that she's tried to clip her nails today using nail clippers. And she's pushed a step ladder over to the cooker to try to make a meal.

My father-in-law flew in today - he suffers from sleep apnoea and uses a breathing machine at night. I am definitely going to keep her in bed till after he gets up - I'd hate her to unplug him just to see what it is!
Posted by Phyl at 11:37 pm

Babies do enjoy bathing whether in the sink or anywhere. You have a cute baby too.