NOT THOSE KRISPIES, I TOLD YOU! 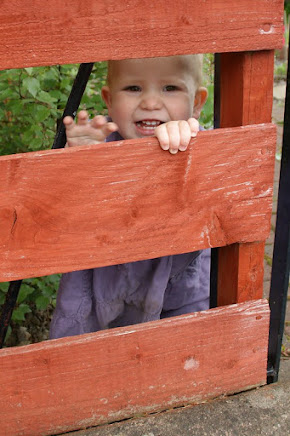 Is 16 months old too young to be able to read? Yesterday several of the boxes of cereal on the breakfast table had less than a plateful left in them so Thomas took three of the internal bags and put them in one box. The result was that inside a box marked Cheerios we had Weetabix minis, Cheerios and Golden nuggets. This morning Amaia sat down to breakfast. She pointed at the Cheerios. Thomas pulled out the Nuggets bag and filled her plate. She's a baby after all - krispies are krispies... she looked at them, she looked at the back of the box, then she looked at them again in disgust, shook her head and pointed at the box. Thomas took out the Weetabix with the same result. He then fished down to the bottom and pulled out the actual Cheerios, she nodded and held out her bowl!
Posted by Phyl at 12:26 am