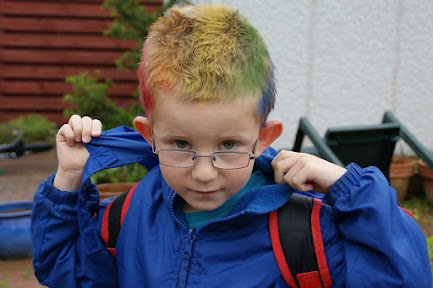 Two weeks ago Léon came home from school with a letter telling the kids that the last day before the long weekend holiday was going to be their annual crazy hair day. Léon's been unable to contain himself ever since. Every morning he's asked if he can dye his hair (while Charlotte, of course, is refusing as usual to even comb her hair into a different parting as that would be far too daring!) Last night we told him today was the day. We fully expected to be woken at 6, but at 7-30 he bounced down announcing he'd lost the battery from his wall clock. Thomas had told him he couldn't come down till 8 so apparently he'd taken it off the wall and sat on the top bunk watching the hands go round until the battery fell out the back and he lost all idea what time it was! So he's off at school now as pleased as punch, and I'm just hoping face-paint does come out of hair after a whole day!