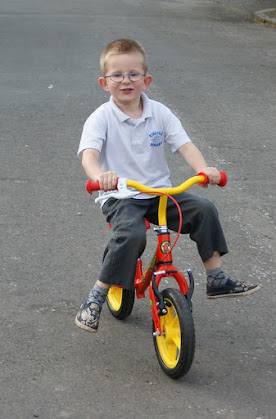 Often in the park over the last couple of years I have witnessed small children zooming about at crazy speeds on little bikes with no pedals. I thought very little about them, though occasionally wondered why anyone would waste money on a pedal-less bike?
At the end of last summer, I took the stabilisers off Léon's little bike and then Thomas and I started the chore of running along behind him breaking our backs as we tried to teach balance to a child who already knew how to pedal. Snow came prematurely and coincided with Léon getting his first glasses so we only got 60% of the way there when we put his bike away for the very long winter.
Last month we started the running again. And as we ran, once again 3 year olds were shooting past us on pedal-less bikes. Suddenly the penny dropped. These pedalfree bikes were 'balance bikes' and were teaching tiny kids to cycle all by themselves so adults didn't need to intervene. I stopped watching Pudge and started watching the tots on the balance bikes. I was right.
I went straight onto ebay when I got home - no luck - all the cheap ones were pick-up only but even on amazon they were only £30 and with three kids who still needed to learn cycling, I figured it was worth a tenner each to save my back and Thomas's.
It arrived last week and within an hour Léon was tentatively balancing all by himself. Three trips out onto the road at the back of my house by himself without us even looking on and he was also shooting by with his feet in the air. I was so confident by today that I dragged out a real bike the same size to test my theory. He hopped on and cycled across the road without the slightest look back over his shoulder. It had taken less than 3 hours to teach my boy cycling, cost £10 and it didn't even make my back twinge!
Today I have lowered the balance bike's saddle to Anna's height and though I guess at three she might take longer than Léon, I will be more than surprised if she hasn't learned to cycle before the end of the summer.
Balance bikes were possibly invented as parents became older. You may be able to run crouched over a bike behind your five year old at 28 but by 43 another solution was necessary! They certainly have my vote. Any idea I had that they were a waste of money is definitely wrong. It made the whole process stress free and Léon looked more than pleased to have taught himself! Three cheers for balance bikes.
Posted by Phyl at 12:20 am

Ellen is very happy about her "løbecykel" (running bike) and we're buying her a real one very soon - looking forward to se if she can manage it.