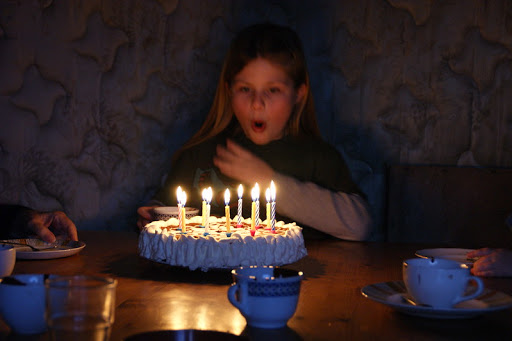 When I told Lots I was pregnant back in the summer and that the baby was due on 09-01-10, her first comment was that I'd better not have it on her birthday (04-01). Charlotte had officially been due on 09-01-00, so I spent the next few months trying to warn her a shared birthday wasn't completely unlikely. Eventually when quizzed, it turned out she assumed that if Granny had £30 to spend on her birthday, she assumed that if Baked turned up on the 9th, Granny would already have spent the money on Charlotte, but if she turned up on the 4th they'd get £15 each. I tried in vain to point out that with Granny's forward planning, the chances were that whenever Baked was born, Granny was likely to shop for both presents on the same day, but Lots stuck to her guns - after the 4th was fine but on it was totally unacceptable. On the night of the 1st I almost went into labour. By the 3rd I decided the chances of Baked appearing on Lotsie's birthday were even greater than they'd been 6 months earlier so I spent the 3rd preparing Charlotte for the big share. I promised double cakes. I told her of future joint birthday parties as adults, especially given they'd share a round birthday. I told her of the fun of a joint 20th and 30th, even mentioning how thrilled our family friend Caragh had been, when Lots had been born on her 10th birthday. I suggested Baked, Lots and Caragh could potentially have joint a 20th, 30th and 40th party with lots of fun and presents. Charlotte was finally won round to the idea (even if I was yet to mention it to Caragh!) Also given Charlotte was born at 0.44 in the morning, she contented herself in the knowledge that her birthday would more than likely come first. Phew, mission accomplished... so I am looking a bit silly sitting here now at 23-39 on Lots' birthday with Baked still on the inside. I suppose I need to come up with a way of un-selling her the idea tomorrow after school...
Posted by Phyl at 12:39 am

Email ThisBlogThis!Share to TwitterShare to FacebookShare to Pinterest
Labels: pregnancy