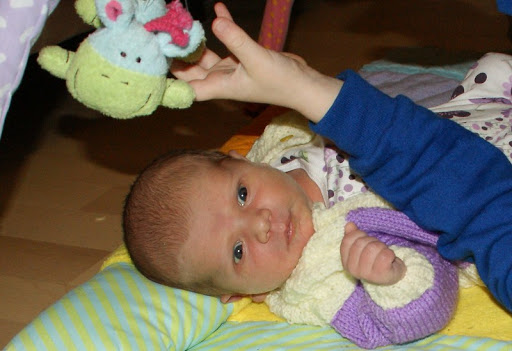 When Amaia was born last week, the paediatrician discharging her wanted me to have her hips checked as he suspected a minor problem. He wrote in her notes that she was to be checked at Yorkhill by ultrasound when she reaches six weeks. When she was three days old a letter turned up inviting her for a hip scan today. How efficient... With Marcel and Lots at school we loaded the three wee ones into the car and set out for the hospital. This was made all the more stressful by Anna being on her second day of potty training, and so being nappiless at the very time of the afternoon she often falls asleep if taken on a car trip! They scanned Amaia on arrival and agreed the hips seemed both shallow and immature. I was then asked her age (given she's big enough to be six weeks). When I replied that she was born last week, they sent us home again telling us she was too young to be checked and asking us to return when she turns six weeks! I just love all these NHS goose chases I seem to end up on thanks to my kids! I wonder where I can apply to have my petrol refunded in the meantime?
Posted by Phyl at 10:05 pm