WHATEVER HAPPENED TO TRAIN DRIVERS AND FOOTBALLERS? 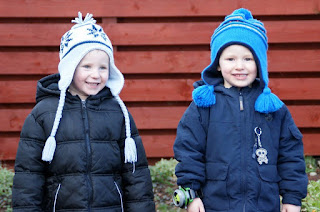 Driving Léon home from nursery one day last week, he suddenly announced he'd decided what he was going to be when he grew up! That's quite surprising given neither of his older siblings seem to have the slightest idea yet, but given he's only four, I assumed he'd come out with train driver or footballer or some such thing. "Ok Pudge, what are you going to be?" I asked as I braked at the traffic lights. "I'm going to be an illustrator" he said quite seriously "a DVD cover illustrator" he elaborated! I nearly crashed the car in shock! Had he swallowed one of my dictionaries? Surely he didn't really know what that was. I asked... "It's the person who draws the lady and man with the gun on the DVD cover and then colours them in," he said describing the cover of Mr and Mrs Smith! So there you have it...
Posted by Phyl at 12:59 am