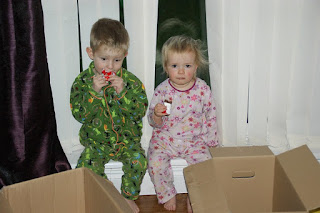 We never did advent calendars when I was a kid - my family wasn't religious and the advertising world hadn't quite mass-marketed the cheap chocolate ones on even the most heathen amongst us back in the 70s. When my big kids were little, everyone had chocolate ones at a pound from ASDA, so they got that. When I moved in with Thomas, he explained that the Danish way is to make your own. So in a more personal way, he bought the three (at that time) kids a present each per day for the 24 days of December, wrapped them in napkins, numbered them and put them in a cardboard box each. Last year they got a sweetie or chocolate two days out of three and a small gift of a pen or rubber or the likes every third day roughly. The kids really enjoyed this because it wasn't predictable like the chocolate ones. I enjoyed the effort and personal touch he was putting into their Xmas. Everyone was happy. This year we needed to cut down on costs so the small pen-like gifts made up about one present a week, with the rest being single sweets, a chocolate biscuit or the likes. This is the first year Anna has had a calendar and obviously she knows exactly what she wants and makes no bones about it. In the first week she received a matchbox car as the present on day two or three, that seemed acceptable enough. Then she had a run of approximately ten days with only food items. Yesterday she received a pack of felt tip pens. Obviously ten days was enough to have forgotten she ever had received a non-food present, and long enough for the food items to have become her routine. On opening her napkin and watching her pens drop out, she marched over to Thomas in disgust (despite her great love of drawing) and shouted Where's my cake?!
Posted by Phyl at 12:28 am

Since when does an advent calendar have to be about presents, food or otherwise? We had the old sort OUP calls "a calendar containing small numbered flaps, one of which is opened on each day of Advent to reveal a seasonal picture". In a world where so many traditions seem to have been taken over as big-brand chocolate-marketing opportunities, I wonder if you can still get that.

This we'an is sure into her "chuck" sorry, I mean her Chla ! In fact her "diet" almost sounds Atkinsesque ?? So at least she should stay slim !

@Harry, that type of calendar is called (or used to be called) an "Ulandskalender" (3rd World Calendar) in Denmark because the proceeds went to charity.