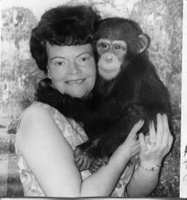 We lost her when I was 16 to a brain tumour - my first real experience of death - I guess I grew up that year :-(


And here's the first Phyllis Buchanan (29-07-17->30-01-68), the woman who gave me her name when she died the week I was born (pictured here with my dad). I know nothing about her unfortunately, but hope I'll learn it all one day when dad finally lets me read his book.

Email ThisBlogThis!Share to TwitterShare to FacebookShare to Pinterest
Labels: family

My dad has written a book - his 'autobiography' if you like but he won't show any of us it! He's also written a couple of other books which he has on his computer but they too are password protected :-(

Interesting! Does he plan to show you them eventually, or will he take them to the grave with him?

My maternal grandfather, Otto, also wrote an autobiography, but my mum cannot find her copy. :-(

I'll kill him if he does ;-) At the very least I want the password left to me in his will, but of course I would be a thousand times happier if I could read them and then sit and ask him all about it!

Why won't he let you read it now? Isn't it finished, or does he think of it as some kind of private diary?

He says it's a bit private and a bit unfinished and he would sort of like it to be published for money! Also he changed his password last week and can't work out how to get back in! ;-) Now you know where I get my Flickr numptiness!