Late last week we got notice from the Danish government that class 0 - class 4  (equivalent of p1-p6 in Scotland) would be allowed back to school on February 8. They haven't been in school since December 18. Amaia was ecstatic. It's odd because she's not really complained about lockdown or looked particularly put out by it. Unlike Léon who is really struggling with motivation and missing seeing his friends and generally looking like he's been in solitary confinement for over a year and Anna who is now constantly wandering around in pyjamas looking somewhat sloth-like, Amaia had seemingly been coping fine with online school. Unlike what I am hearing from back home, online schooling here actually is that - they log on at 8am and stay on with various teachers and all their classmates every day till just before 2pm. They have the same breaks as they usually do at real school, when they are encouraged to go outside to play. They occasionally have a free period or get sent out for PE but their day is well-structured and interactive. It definitely isn't a case of one lesson with a specific teacher then loads of homework being supervised by stressed parents. So it was only really when it was finally over, that Amaia came clean about how much she has been missing physically meeting up with friends.

So Sunday night she had clothes laid out, had washed her hair and made her lunch. After Thomas's birthday brekkie she was out the door like a shot for the school bus. Given the two biggies were still home I accompanied her to the bus stop. It isn't far but the roads are slippy and cold so I wandered up with her. She didn't even complain about the early start (the bus comes at 7:44) or the RealFeel temperature - I'm including photographic proof in case you don't fully believe me! 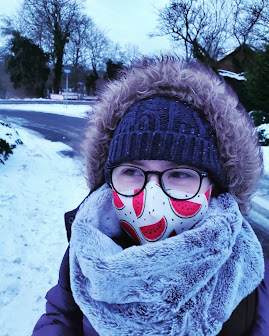 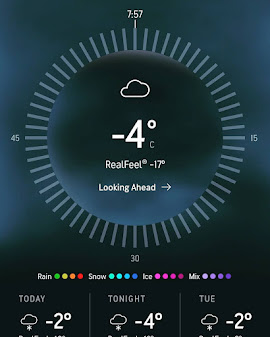 And she had so much fun yesterday, she's away in today with her sledge for break time! 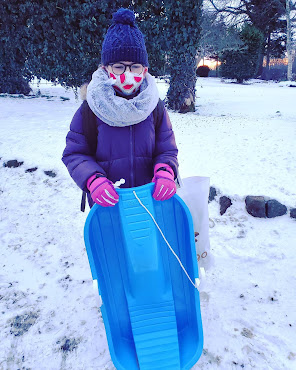 I just can't wait till the other two join her, not only so I don't need to walk her to the bus in a Siberian wind but for the sake of their mental health too.
Posted by Phyl at 10:19 am