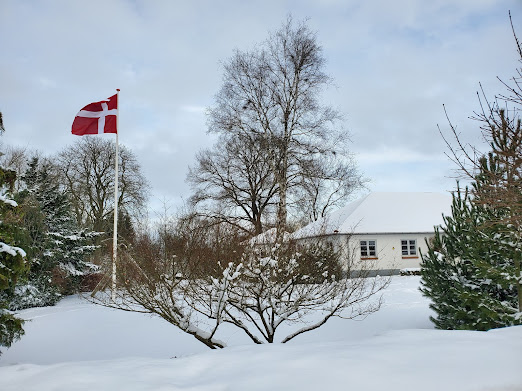 Denmark is a country of contradictions. It is both a welcoming country and a rather exclusive one. Since I moved here in 2019, I have found the Danish people to be very kind and helpful, if so painfully shy at times that it really is difficult to make new friends, especially if you are the one with the linguistic disadvantage. They will all smile or nod to you but they want you to make the first move, as far as I can tell, so if you are a bit of an introvert and a bit worse at Danish than they are😂, it could take a lifetime to get somewhere... and that is of course without analysing how detrimental the timing of the current pandemic has been on our integration.

Thomas had been away from Denmark for almost two decades. The financial crash, my less than reliable child maintenance payments and Thomas's parents' immigration to Italy after retirement meant that as a couple we made it to Denmark for less than four weeks in total in the decade before we moved here. So not only was I moving to the unknown, to a certain extent, he was too.

Originally from rural Jutland with some study years in Aarhus and all his family now in Copenhagen, Funen has been an affordable but lonely option. We know almost no one on Funen island other than the odd friend I made on my Lærdansk Danish course, and they, of course are a godsend. And as soon as this pandemic is under control, I dearly hope we can meet up for a walk in Munkemose or a meal somewhere.

Danes can be incredibly generous people and I have met a volunteer through my college course, a 'frivillig' who has given up many hours of his time, with no expectation of anything in return, to help me with my spoken Danish. He rings me on Googlemeet without fail at least once a week. He helps me practise speaking. He helps me through the cultural maze of understanding Denmark, which again is something Thomas feels almost as lost with as me. Thomas is a Dane who isn't wholly a Dane. He was brought up in Denmark but half of his norms from childhood were German, much of the food, many of the traditions. He lived in a village, but as the minister's son, was always on the outside rather than the inside of the life led by the other kids at his school and of course, he left Denmark before ever having worked here properly so he's as foreign as me in that respect. But he has the disadvantage of sounding Danish, so everyone takes it completely for granted that he knows what is expected of him, when often he has no idea. So now we have Jens, who I can ask if I am not sure 'what a Dane would do!' Over and above the linguistic help, I genuinely feel he's become a friend I can ask for advice or even make laugh with the odd silly anecdote from my immigrant life. He recommends books I should read, programmes I should watch, places worth visiting in the vicinity and more. It's a bit odd that I've never actually met him, because of Corona we only know each other on screen! But that's Corona for you!

But I said it was also a rather exclusive place. And by that I don't mean classy and expensive, I mean that sadly you can be left a bit on the outside. A very obvious example of this is the tradition of Protestant religious confirmation. Don't get me wrong, Denmark isn't by any stretch of the imagination what I would consider a very religious country. In fact Léon and Anna have both attested to the fact that only one child in each of their classes claims to be religious, with the majority going as far as saying they do not believe in any form of God. So all in all that seems to correlate with their experience of Protestantism back home too.

So what is the issue, you ask? The issue is that for want of an alternative the Danish confirmation has become their version of a Coming of Age ceremony. For an hour a week for the whole of year 7 (kids aged 13-14), the class goes off to the local minister for some religious instruction. And how can you convince kids that age to participate? At the end of the year they get a confirmation party, some lovely clothes to wear, a great meal and everyone who has watched the child grow up, not their own friends, but their extended family and their parents' friends turn up with a cash present for the child. Afterwards they feel that they are accepted into the adult world and they will be treated as a grown up. It's a win win - the kids get money and get to feel grown up and the church gets to perpetuate its existence.

To all intents and purposes the Danish confirmation ceremony functions more like the Bar and Bat Mitzvahs we saw many of back home at Mearns Castle. Back home only truly religious Protestant teenagers get confirmed, and they do it for the religious experience and nothing else. Anna was brought up a Scot. She will always culturally be Scottish and as a Scottish child of no faith, she could not live with what she would feel to be the hypocrisy of taking part in confirmation into a religion that is not her own, especially for financial rather than spiritual gains. She can see that to the Danish children, it is a tradition that they expect to take part in, and she accepts their enjoyment in that but just as they are happy and comfortable with it, she finds it alien and against everything she has been brought up to expect.

The problem is that they now get so much money from their confirmation party, there is no incentive not to perpetuate it. The schools even give their pupils a day off after the ceremony 'Blå Mandag' to hit the town to splash some of their new-found cash on clothes, food and similar. To give you an idea of the sums we are talking about, Léon joined his Danish class about an month after this ceremony had taken place in his year group (and the kids were already proclaiming in RE lessons that there was no God, I might add!), and while three of the girls had used some of their money to buy themselves a horse, most of the boys were looking at mopeds for theirs. On top of this they had the cash to go into town to the cinema, McDonalds or similar every week last year. Obviously Léon could not begin to keep up, so was doubly at a disadvantage on arrival here. He was not only the new kid and the foreign kid, he was also the kid who didn't have the financial means to participate in any of the social gatherings in his year group. And as a family who are still trying to live on one income in a two income country, we were in no position to help him out. Things had just started to look up when he managed to get himself a weekend job, only to find that route shut down by the pandemic. Restaurants don't need dishwashers when they are forced to become Take Away only during an extended lockdown.

So now it's Anna's class's turn. A few traditionalists have suggested we simply sign her up to participate like the others but it really isn't that simple. You wouldn't say that to a Muslim kid or a Hindu one, and quite frankly that is how unchristian Anna's upbringing has been till now. She says it would be hypocritical to have herself confirmed in a religion she doesn't belong to or believe in for the sake of some cash and a party. She would happily get herself confirmed if she found God, but not for any other reason.

This is obviously an issue for immigrants of other faiths in Denmark too. Every week when the minister comes to teach her class, Anna sits out the lessons with a girl from Vietnam and a boy from Syria, as none of them can realistically be included in this tradition either. On a positive note, the three have become firm friends, but on a negative one, they are excluded as this is done in class time.

Obviously in large cities, where there are more immigrants, it is less of an issue. In cities the lessons are often outwith school hours and many kids then have the option to take part in a Humanist confirmation instead. And had we been here longer so Anna actually knew her way about a bit and felt more confident, and of course, had there been no pandemic, we might have gone down that road. But there are no Humanist options in our council area, so having her take extra time off school, especially when she's trying to catch up on five missed years of Danish, to travel further and alone during a pandemic so she can still be the odd man out, the foreign weirdo, is a bit much.

And quite frankly, if it is mainly so she can keep up financially, that would not work. Ninety percent of the adults and family who know Anna are in Scotland, so would have no notion that they would be meant to attend a confirmation (religious or Humanist) party, let alone give cash. Scottish kids don't usually get confirmed and when they do, cash really isn't the obvious present. They'd be more likely to be sent a pretty psalm book or a golden crucifix!

Thomas has been away 20 years and there's been a pandemic almost since we arrived here so he sadly hasn't managed to reconnect with the majority of his old friends. But even if he had, they have, for the most part, never even met me, let alone Anna, so inviting them to her confirmation would be a seriously odd first get-together after two decades, especially given almost none of them live within two hours drive of us.

Anna has been more reserved than Léon since we got here, so the idea of her whole year group socialising next year post-Corona together and her not having the financial means to integrate is upsetting. It won't help her feel this is home, nor will it help her Danish skills. Quite frankly, it is the last thing she needs, but sadly it isn't some kind of party that will solve that given we know almost no one here we could invite anyway. And until there's a lull in this pandemic long enough for me to get a job, we won't be able to compensate her so she can participate in her class activities.

So much as she is happy for her classmates and also her cousin, who are getting to take part in something they have looked forward to forever, this very alien ceremony just isn't for her and she feels much more of an affinity with the other foreign kids. I imagine many immigrant kids feel quite out of their depth when puberty coincides with your entire year group participating in a tradition that you are not part of. But you can't suddenly take on a new religion just because you've moved to a new country. I guess sometimes it is hard living somewhere where the culture is so alien to you.