Update on the voting front 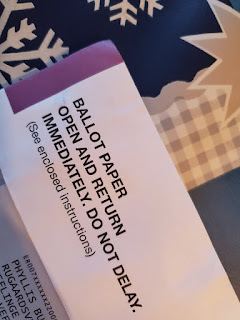 I was having a good old rant last week about my voting papers. Having been in Scotland for 48 hours more than three weeks ago, my mother (in my constituency) already had her postal vote sitting ready to send, having applied when the election was called. Sensing the way things were going in the UK, I had applied to be on the voters' register in late summer and had filled out my postal voting request mid-October, but by the beginning of December there was still no sight of it. I emailed the electoral body and was told not to worry as the foreign postal votes were being sent out on December 2. Even without factoring in the inevitable delays caused by Xmas post, surely sending out ballot papers to foreign destinations nine working days before an election is cutting is a bit fine?

Inevitably, they turned up around 2pm on Monday - that is December 9, for an election in another country four days later. I was seething.


Had I not known mum had been sitting on her papers for at least three weeks when mine arrived, I'd have been annoyed, but this made me incandescent. I would love to know who exactly took the decision to send polling cards out to UK citizens living in EU countries, when there is little chance of them getting back on time, for an election being fought along pro- and anti-EU lines, with the government and local politician firmly in the anti-camp. I will, of course, be making a formal complaint, but that will be of little comfort if my family's entire future is changed by the result of this election.

Still, I decided on balance, I was at least better trying to return it.

Denmark is an annoying place when it comes to the post (think I might have been caught shouting 'Why is the Danish postal service so fucking stressful?' on Monday afternoon!). If you are foreign, or don't have the best Danish, you might as well throw in the towel... I can only just cope with it after many years listening to Danish. Denmark feels like it is ten years ahead of the UK on the phasing-out of the post office to me. There don't seem to be any actual post offices in Nordfyn (my council area), not even in the big towns, instead you have to google where post office counters are hidden - often in supermarkets, corner shops or in my case, the nearest one with an afternoon uplift is inside a gift shop, 6km away from my house. (My nearest one is actually in the Coop next to the girls' school but it only has morning uplifts). To do this you need to be good enough at Danish to know how to google it because you aren't looking for the word post office, you are looking for Postnord - the name of the service. You then have to google postal uplifts, because the post boxes in the street all only have one uplift and that is usually early morning. Finally, when you arrive at the supermarket/garage/gift shop, you have to be able to explain why you are there and what you are wanting, which obviously you don't in the UK. If you have no English and you walk into the post office, there's a high chance you're after a stamp of some sort, but here in a Coop or gift shop, a stamp is usually the least likely thing you are after! Furthermore, because post is being used less and less, it has become both more expensive and less able to be tailored to your needs, so I could send it tracked or normal, but neither got it there any faster. The woman explained she thought there was only a 50% chance of it arriving on time, and of course she is probably unaware of the UK obsession with Xmas cards that doesn't really exist elsewhere in Europe, and their knock-on effect on Xmas deliveries so I imagine I'm looking at a more than 50% chance of paying for a stamp to send it back and still be disenfranchised. When I showed her it was my postal vote she smiled and said in Danish - 'Ahhh, you have to vote to get rid of that man!' No mention of which man but when I nodded she did seem to stroke my letter kindly as she dropped it in the postal bag - I expect she'd put two and two together and worked out that if I was living abroad and at least attempting a conversation in a foreign language, chances are I wasn't a raging Brexiteer.

Back in the UK, I'm still astounded at current polling. That someone so obnoxious, deeply offensive and incompetent, with no policies or plans can be polling 40% of the vote is mind numbing. This isn't someone we can simply swap out in five years. Five years from now the NHS and the economy will be unrecognisable. The country that already has the largest gap between rich and poor in Europe will have even more inequality and that isn't what makes for the best, happiest or most successful places. And in my own constituency, if the Tory gets back in despite the 75% Remain vote in 2016, I guess that means people are ok with their MP making no attempt to represent their wishes, and on a more personal note, it will mean people I consider neighbours and even friends will have been ok with the way EU families like mine have been treated.