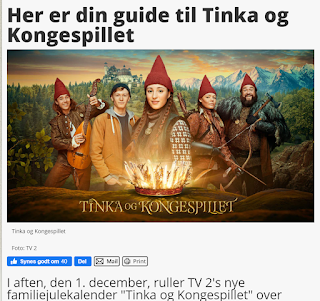 I think I have mentioned the concept of TV advent calendars more than once over the years. In Denmark the national TV channels put on a wee 'advent calendar' in the form of a kiddie Xmas soap opera for the 24 days of December. Twenty (approx) minute episodes of a Xmas-themed kiddie story, knee-deep in magical elf people all dressed in red pointy hats, kings, queens, snow, horses, thatched cottages etc etc. They aren't overly taxing on the brain (we're two episodes in and I can already tell how the whole story is going to play out, but Amaia is 9 and she can't so I guess that's the whole point).

They release old ones on DVD so our kids have always followed at least one every December as it was traditional and good for their Danish. But this is the first time we've spent December in Denmark so we're following the current year's one in real time. Now I can see how big it actually is - apparently it was the only topic of conversation today in Amaia's class, after last night's opening episode. Everyone has watched it - male, female, immigrant, ethnic Dane - doesn't matter - there's no get-out clause if you're in that age bracket and understand Danish.

And they're not missing out on the commercial opportunities either. Amaia saw the cardboard Tinka calendar in Coop over the weekend, so is opening windows to see what the current evening's episode is going to be about. She discovered today's was a picture of lanterns this morning but had to wait till 8pm to find out their significance. She also picked up the panini-style Tinka album over the weekend and now they are all taking in cards of the main characters to swap doubles with classmates. It's all very exciting apparently. I'm quite surprised the English-speaking world hasn't jumped on this money-spinning bandwagon. I guess that's what happens when you only have one language on your radar.