I didn't wake up dead

I mentioned my little hang-up back in December... But it would appear that I woke up alive yesterday and even made it all the way through to midnight. I think that might take a few days to digest. I have become the primary Phyllis, after five decades as the subsidiary Phyllis. So from here on in, I'll be winging it, I guess.

Dying yesterday would have sucked. It would have felt like no time at all. My own son is 21. Hers was 24 so there was very little difference there, though obviously she didn't also have kids all the way down to eight. I don't feel terribly different to how I felt at 25; she probably didn't either. Life can be so cruel and unfair at times. My dad never did get over it enough to talk to me in any depth. Only on the day his dad died when I was 22, did we come anywhere close. It took reading his memoirs to really get a feel for how he had dealt with his mum's early death. Everything about my childhood would have been different, had that bit of history changed. I'd have known my granda, or rather Linda would have, as Phyllis the 2nd would never have existed. Instead he was a distant, quiet man, whose façade was impossible to penetrate. Dad would have had a lighter heart too.

I'd like to have known her. Like her son (my father) after her, she died of something that is completely curable today; it was simply caught too late and that is fate's cruellest blow. 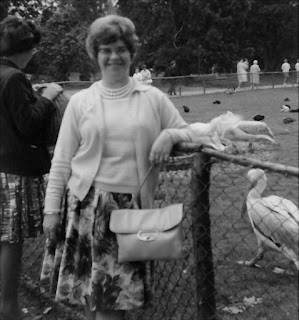 I guess from here on in, I should try living a bit for both of us. Here's to Phyllis the first. RIP.