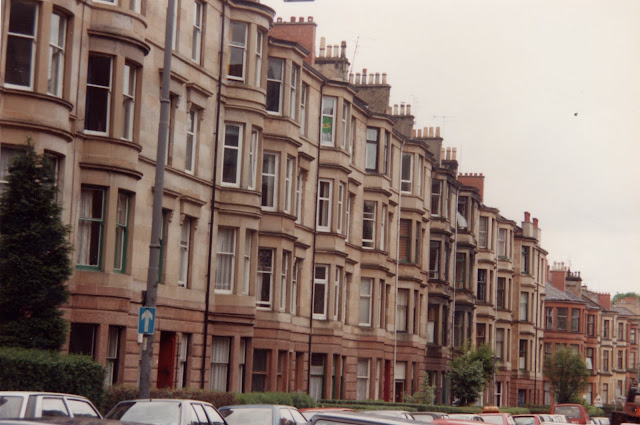 Twenty-five years ago today, I got the keys to my first west end flat. Top, left, 9 Havelock street. I remember it vividly... Friday 13 August 1993! There was an omen in there if I'd looked for it, I think!😉 I was never the superstitious type, but I do remember thinking it was a funny choice of day to take on a twenty-five year loan.

Our removal men dumped all our furniture (most of which we'd bought at the Barras and various other second-hand places) on the pavement as they couldn't block the single-lane one-way street. An old busy body came marching up the street and looked us up and down... Are you moving in or out? she asked, or rather demanded. In, I replied tentatively. Good! she spat back, 'cause I hated the people before you - loud, dirty, loose morals... OMG, I thought, what have we done?!

Not only did it turn out she lived in number 9, but she lived directly beneath us and having been there since 'the Clydebank blitz', she assumed the role of close-matriarch and acted as if she owned the whole block and made all the rules! She was an absolute nightmare. On numerous occasions I found her in my kitchen going through my fridge and when I learned to lock the storm doors we used to see her beady eyes peering through our waist-height letterbox at various times of the day and night!

When we decided to sand our floorboards, I elected André to go down and ask if there was any time she was usually out so we could do it then so as not to disturb her. I won't live below sanded floors, was her ever so helpful reply! Every time I hammered in a nail to hang one of my photos, she was up like a shot screaming through our letterbox, and eventually being completely ignored by us as we hid inside giggling.

After about two years a nephew turned up and carted her off to an old folks' home and peace returned to Havelock street!

So if things had remained as they started out in that flat - with both of us young and reasonably happy, my mortgage would have been up today. No more sending £1000 a month to the Bank of Scotland - boy would that have been nice! But it wasn't to be... we drifted apart and separated 12 years later and so my current mortgage still has twelve more years to run (assuming we get to stay here in the UK).

Would I trade my current husband for no mortgage? You bet I wouldn't! I am older and tireder now, but he and our kids are definitely worth £1000 a month!