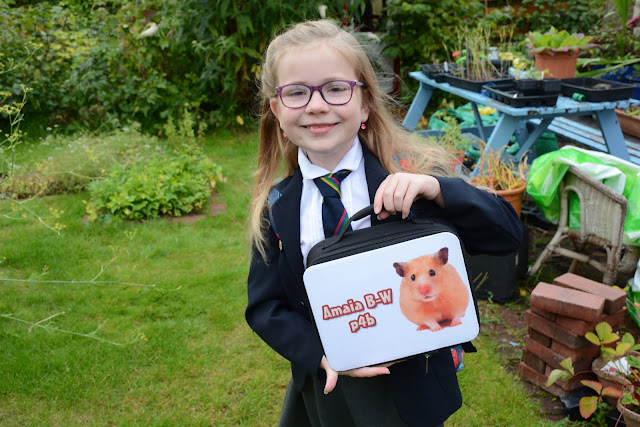 Today is the day I have been semi-dreading since Amaia started nursery in 2013! At nursery she was home by lunch time and for the past three years she has had school lunches provided by the Scottish government, but today was pay day! Either I start coughing up £2 approx per day for lunch, or she needs to take sandwiches. A tenner a week isn't dire, of course, but when you multiply it by the number of kids I have, it is a non-starter, and I can't exactly be seen to be giving Amaia preferential treatment simply because she is better at stubborn stand-offs, so it is all or none.

The problem is Amaia hates sandwiches. For years I thought she was just being annoying and fussy until it suddenly occurred to me that there was actually a logic to her whole standpoint. In Amaia's head savoury food is hot, sweet food is cold. She'll eat a gammon steak or a slice of bacon but a gammon or ham sandwich is entirely unacceptable. Salami, chorizo or serrano ham is something you get hot on a pizza, not a cold sandwich filler, and until recently cheese had to be melted on toast or on a pizza. Our one saving grace is her huge love of salad.

It's odd as she's not a fussy eater in general - she eats most things including the most exotic spicy dishes filled with hot chillis, but that savoury hot, sweet cold rule in her mind is hard to break. She won't eat cold boiled eggs though loves eggs. She waits for things like apple crumble to cool down before eating it... She also used to hate ice cream as it was too cold! If a meal cools down half way though, she stops eating altogether until we permit her to leave the table and reheat it in the microwave!

I could of course solve it by giving her only jam, honey and chocolate spread for the next ten years but I suspect my dentist friends would have something to say about that, so it's not happening!

So distracted by a cute hamster, her name in bubble writing and a compartmentalised box, she's gone in today with a buttered piece of bread, some tomatoes, cucumber and mixed stuffed olives. ***

Hopefully some time over the next year I will get the filling into the sandwich!

***Update: Well, today was a complete disaster! The juice from the olives leaked onto the bread and the custard creams (that I didn't even know she'd sneaked in 😂) so she came home and made super noodles as she'd eaten nothing at school. Tomorrow we're going to try lots of tiny Tupperware boxes 🤔
Posted by Phyl at 3:10 pm