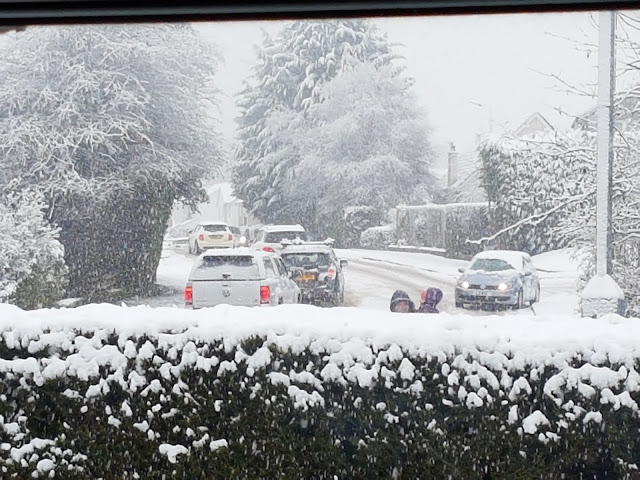 I'm getting dressed in my bedroom (with the blackout blinds down) listening to the kids happily eating breakfast in the dining room next door. Suddenly Anna comes out with '...if we even get there', which I think is an odd comment given school has been back since yesterday, now all the snow has gone. I dive through topless, wearing just one sock and stare in horror - it's back, and it looks a damn sight worse than last week, or to be more precise, it's probably the same as last week (though it is still actually snowing heavily which it wasn't on Thursday and Friday), the difference is the council has opted not to shut the schools so the gridlock is starting.

I jump onto Whatsapp: 35 new messages - not a good sign! Reports come in from parents who have been stuck for 50 minutes and have moved one kilometre. Buses are stuck, cars are abandoned. As people get out to push cars that are stuck in front of them, others try overtaking on blind corners tooting in disgust. I stand on my dining room chair to watch over the hedge. In less than five minutes I see three cars get stuck, two overtake dangerously, one lose its back end and skid onto the pavement and not a single bus (on a normal busy bus route). I decide I am not taking my car. After 33 years behind the wheel, I know I can drive this, but I can also see that not everyone else can and I sure as hell am not going to risk it, besides, I'm at the bottom of a cul de sac that doesn't get gritted except in emergencies so I have half an hour of digging just to be allowed to join that queue on the photo.

Next I consider walking and, to be honest, would have had it not been snowing heavily. It takes me exactly 45 minute on foot to get to school on a sunny day and I do do that, but in this, I'd add at least ten extra minutes for weather and ten more for the length of Amaia's legs.

Over an hour walking in this means taking a complete change of uniform with me as the girls will both be soaked. It is a 2 hour round trip for me to drop them and another 2 hour trip to pick them up and that's assuming school doesn't close in the meantime and call me to pick them up early. So I decide, it isn't worth the hassle. It's only four days since Amaia got over a cough and cold and half the class has already told me on Whatsapp that they've thrown in the towel, so they won't miss anything vital that they won't need to repeat. I'm not walking it till the snow stops.

That leaves the biggies. They can probably get to school in about an hour if they start walking. Again, they'll get soaked, but at least I don't need to accompany them. The school uniform (inc blazer and black leather dress shoes) is compulsory so they need to wear something else and change when they get there but that necessitates carrying a bag of clothes on top of carrying their bags and fighting through the snow for an hour. On arrival, they have nowhere to store their wet clothes - s6s are not eligible for lockers so Lots doesn't have one. Friends on Whatsapp are telling me school is a ghost town. I then get a text from high school telling me the buses are unable to run so the (approx) third of the pupils who come from Eaglesham have not made it in. It's at times like these that I wish Scottish schools looked more towards Scandinavia for school attire rather than basing compulsory uniforms on the London climate...

The M77 is at a standstill, friends are tweeting they haven't moved in 90 minutes. Everyone who is already on the road is saying not to add to the chaos. But parents who were off last week are so scared of phoning in to work to say they are stuck, that they are attempting the impossible. Some are getting there, but more by luck than by sensible decision-making.

A friend who was up much earlier than me has seen the gritters do their rounds around 5am, followed by extreme rain that has washed it all away, then heavy snow - poor council workers will be getting the usual abuse for that, no doubt.

I decide to reassess at later in the morning. Next, I see our station on the BBC page, I decide I should maybe consider throwing in the towel for the day.

In the meantime, I see an absolutely terrifying message on Whatsapp (complete with photos). A friend (the mother of one of Amaia's best friends) has tried walking her kids to school as she is much closer than us. A school(?) bus has missed a corner, skidded onto the pavement hitting a pole, and missing her daughter by less than a metre. A bus!!! Take that in - kids walking the school route narrowly missed by a bus skidding on the pavement. I am beside myself at the thought of what could have happened this morning. It takes my breath away, then I get angry. Sorry, guys, you are now not walking to school if it's this dangerous, decision taken. I am so glad Amaia still has all her friends in one piece and am sending e-hugs.

I then see a further message from another mum who has actually managed as far as her work approximately 13km from here and has been told off for being late(!) and asked for photographic proof that it is actually snowing as it isn't there!!! The words fuck and off spring to mind. Sorry, shaming people into driving in such dangerous conditions is insane. This needs sorting out.

Around lunchtime I decide they can build a snowman instead - call it a science or art lesson - I don't really care. 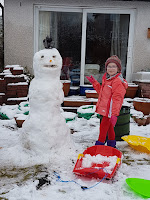 It has stopped snowing now and started to melt and odds are that I will get them to school tomorrow but when did the world go so mad? What most of us do (I don't mean doctors and the likes) is not crucial. We can do it from home or we can do it tomorrow. It is not worth risking life and limb for. Today was utter madness because when people are told it isn't a snow day they are so terrified of not turning up at their office or shop that they feel compelled to endanger themselves and others. We need to build some more pragmatism into life and start analysing what's actually important!