I was about eight before I became fully aware there were other languages. This is quite ironic given I was being brought up in a house where I was expected to speak standard English despite the fact that my parents spoke a mix of English and Scots and my grandparents spoke fully in Scots. It never occurred to me that a standard English speaker could conceivably have an issue fully understanding a conversation such as the one referenced on Twitter today by David Leask:

My children are, of course, living a different life. They have heard a minimum of two distinct languages every day since they were born - English first alternated with French, then by the time Léon came on the scene Danish had been added in. All the while Scots was still in the mix, of course. When Thomas's parents visit, German is added in around the dining table, and sometimes Schwäbisch too. When we visit them at their home in Tuscany, Italian is dropped into the mix and at school Spanish is on the agenda too. The TV intermittently gives us Swedish, Norwegian, Icelandic and even the odd movie in Georgian.

With this backdrop, I found the three youngest this morning on my bed playing with the turtles Marcel had brought them back from a lads' holiday to Greece when he was 18. (Or rather the girls were playing and Léon was humouring them with his presence...) 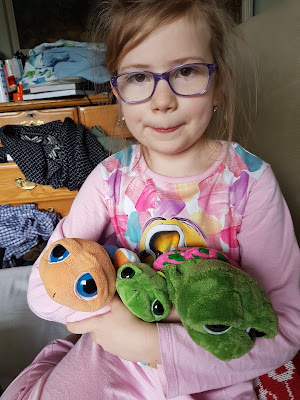 Do your turtles have names? I asked, nonchalantly.
Of course, replied Amaia: The baby is called Feeki...
Feeki? I enquired, Like F-E-E-K-I?
NO! It's pronounced FEEKI but it's spelt with the funny letters in your Greek dictionary! He's Greek you know, so you can't use our letters for his name. I looked it up - his name means 'Seaweed'.
What about the other two?
I looked up 'Coral' for the mummy and 'Zesty' for the daddy, so their names are this:
and she proceeds to write and slowly read:

I'm not sure many eight-year-olds look up an English-Greek dictionary before naming their soft toys! I do think growing up bi-/multilingually gives you a very different outlook on life!
Posted by Phyl at 11:32 pm