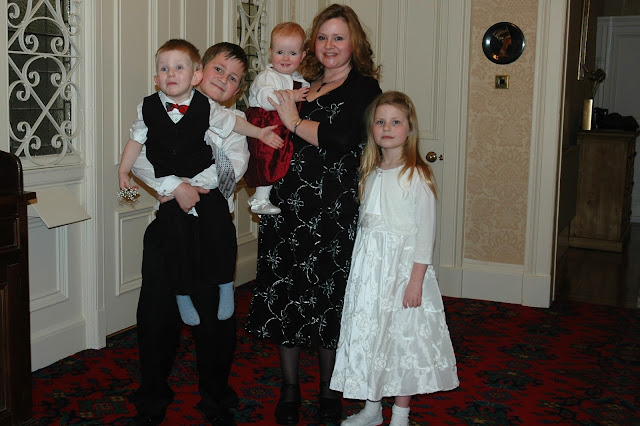 Here's a photo of me with all my kids (then) on my wedding day, nine years ago today. No, I don't know what Marcel is doing to Léon either and I'm not even sure I want to know!

Although we'd been living together for a number of years, we had not got round to marrying before then (something to do with my ex-husband refusing all attempts at divorcing him, but that's another story!)

Today Thomas is having to work from home, rather than Edinburgh where he should be, because of this major snow lock-down in Scotland (and much of Europe). I was postulating over lunch that had our wedding been today rather than then, it would not have happened. Glasgow has shut all its schools and museums so I expect the registry office is also shut. We'd have got some cool photos, mind you!

During this conversation, Anna pipes up: 'Do you still have the dresses Charlotte and I wore at the wedding?' I think I saw them in the wardrobe recently, so I say I do and she immediately asks if she can have them for her kids to wear at her wedding! Charlotte then tries to gently point out that it isn't really the norm to have your kids at your wedding in this country and Anna, sweet and naive, looks terribly upset and asks why people would consider not even inviting their own kids to their wedding 'Surely they don't just leave them at home?' she sobbed! You've got to laugh! Charlotte finally spelt it out to her 'Most people live together, then get engaged, then get married, then have kids'.

Amaia's reply? 'I still think you were selfish getting married before you had me. That makes me the only one of your kids who you didn't invite to your wedding!'

Funny! I think we have some rather unorthodox kids in this family.