Sunrise over a volcano 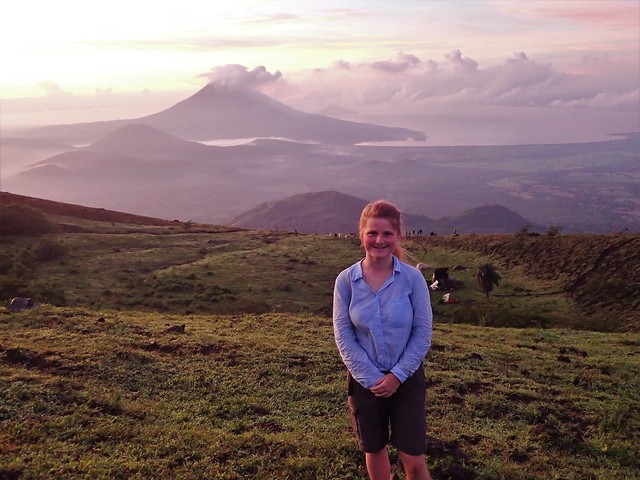 I meant to blog a link to this when she came back at the beginning of July, but we left for Italy then and I never got round to it...

Imagine being 17 years and eight months old and already having climbed to the top of a volcano on the other side of the world in complete darkness at 3am, to sit on the top and wait and watch sunrise over four more volcanoes. Imagine then going down and climbing those other four and volcano-boarding down the biggest one, Cerro negro, which last erupted the year before you were born...

One of the most difficult things I find with parenting teenagers is the sheer amount of envy you have to control deep within yourself, when you see their freedom and what's on offer these days. I was thrilled with a week in Switzerland (on a bus) on a geography trip as my high school experience (and I didn't even do geography!), now both my kids have gone to the other side of the world to do charity work and I'm practically glowing green. I don't envy them what awaits them after uni, of course, the world is so much more depressing than it was in my 20s, but as a traveller, I would kill to hide away in their rucksacks at times.

Charlotte came back with wonderful tales of another world. She taught in crowded outdoor classrooms where kids sat at desks combined with chairs but always with one eye on the sky as the daily torrential downpour meant they needed to be ready to run for their lives in the middle of a lesson, though being kids some were tempted simply to dance in the refreshing rain. Kids as young as seven could be under cover in less than thirty seconds with all their belongings when they needed to be. She described them as curious and desperate to learn all she could teach them. She told us of them crowding round her wanting to touch her hair as they were all much darker than her.

She also spent a few nights sleeping on the floor of semi-derelict classrooms, none of which had or needed windows, under mosquito nets and spending the days painting and restoring them. She got quite acquainted with the Nicaraguan flag as all school buildings have to be painted in the country's colours! 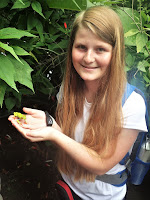 She showed us photos of the wildlife; things I've never even seen in a zoo. They simply walked past her in the more dense jungle areas: tiny frogs, coloured birds, monkeys, sloths and snakes. We've had pet hamsters since Charlotte was 13 and she's never picked one of them up yet - for as long as I can remember Charlotte has never liked animals with fur (yes, I know that rules out a few!) but she used to ask for terrapins, tortoises, snakes and the likes when she was little, so I'm surprised this itsy bitsy frog didn't make it home in her luggage!

She told us of the amazing food, proud that she was the only one in her group not to get an upset stomach! But most of all she told me that she'll keep in touch with her school and go back one day to see how they are doing. Then she turned to the three wee ones and said 'One day, I'll take you there', and for now at least, she really means it! Her world is much bigger now.

I'll leave you with this cute conversation I overheard when Charlotte was taking Amaia through her photos:
'Lotsie, see when people go volcano-boarding?'
'Yeah?'
'Do they shut the volcano while people are doing it? I mean, like, do they turn it off!?'

And here are her photos if anyone wonders what Nicaragua is like.
Posted by Phyl at 1:04 pm