It's only Wednesday today. It feels like three weeks on Friday...

It started at the beginning of last week. Charlotte casually asked me about 10 days ago if she should be worried if her pee was darker and smellier than usual. I asked if it hurt to pee, thinking she possibly had a urinary tract infection. She said no and had no other symptoms so we thought nothing more about it. Eight days ago I asked her in the passing if that had cleared up and she said she felt it had improved a little but not altogether disappeared so I phoned the GP while she was at school and arranged a phone consultation for 4pm. I fully expected they'd tell us to bring up a sample and that they'd check that. Unfortunately Léon managed to forget his PE kit in his Maths class that day and when got home at 4:03, we'd missed the call and last GP consultation of the day. Charlotte said it wasn't a problem as it was more or less back to normal anyway.

On Wednesday she was fine. On Thursday she was complaining of a backache and searching her memory for when she could have pulled a muscle. There were no longer any signs of problems with her pee so we didn't instantly connect the two. She also had a slight cold. I asked on Thursday if it could be a pain in her kidney rather than her back as I often get kidney pain when I'm under the weather. She considered it a possibility and decided to see the GP if it got worse.

Friday, she wasn't overly sore but Saturday she complained her back pain was worse and coming through to the front. I phoned the Out-of-hours GP service on NHS24 and was told to give her paracetamol and see our own GP first thing on Monday when it reopened. She wasn't in any way distressed, had no temperature, was eating normally and showing no other symptoms so we weren't overly worried.

On Sunday at lunchtime I shouted her to come and eat. It is completely normal not to see Lots before Sunday lunch! She didn't come down. I went up. She was burning hot and soaked in sweat. I phoned the Out-of hours again and told them I needed an appointment. I bundled her into the car and drove to the Victoria Infirmary. I then discovered that the second Sunday after schools go back is a bad day to go to Out of Hours... every 5-7 year old in Glasgow seemed to be in there, all accompanied by their younger siblings. I even knew two other people in the queue! After two hours we were seen by a woman GP (whose name I wish I had noted down, so I could thank her now). I fully expected a 5 minute consultation and a prescription for amoxicillin. She discovered Charlotte's temperature was 40 degrees, her heart rate was up at 160, her blood pressure was at 90/60, her pee was full of blood and she was retaining fluid. She said she needed to be hospitalized as a sepsis risk and advised me to drive her straight to A&E at the Queen Elizabeth University Hospital. She told me to wait outside while she rang ahead and prepared a letter for them of her findings. She then had second thoughts and told me as Charlotte could be as close as five hours from developing sepsis, she didn't want us waiting in A&E so called an ambulance to drive her between the two hospitals, telling me to abandon my car. She was dragged out, hooked up to a heart monitor and driven across Glasgow. The QEUH had her hooked up to intravenous antibiotics and fluids within the hour. 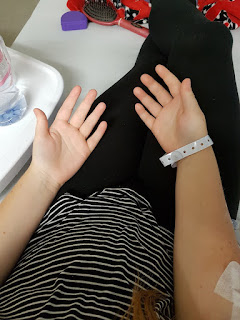 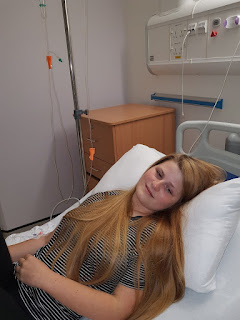 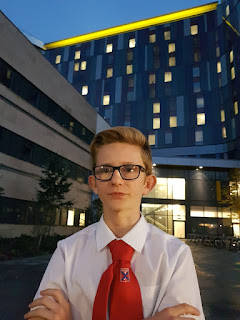 Charlotte is 17, nearly 18. In Scotland that makes her a legal adult, so it also means she was transferred to the adult hospital, not the sick kids' hospital next door to the QEUH. That meant I was only allowed to stay for visiting hours rather than overnight as you would be with a child. I couldn't go with her for kidney scans or blood tests, etc. Leaving your child hooked up to intravenous antibiotics and fluids while they shiver and shake uncontrollably is extremely difficult. Sleeping with your phone on and beside your pillow, so as not to miss any emergency calls is also hard. By Tuesday morning, I was convinced it was about Friday. I had driven in and out to Govan a dozen times in just three days, taking various worried siblings to see her. 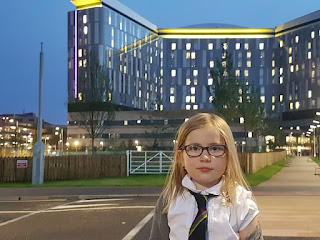 On Monday morning she was taken for a kidney scan and that night she was deemed out of danger and moved upstairs, to a room with the best view in the whole hospital of the helipad! By then her fever had disappeared enough that she was getting seriously bored with the lack of things to do and with the food!

Last night they agreed she could move onto oral antibiotics and go home, on condition she came in for blood tests as an outpatient till her infection levels dropped to a nil. They had dropped considerably but not to the level they had been hoping for. So we'll be back again tomorrow. Here's hoping she's well by then.

I think the biggest shock for me in the whole thing was that she went from not having a fever to being considered an imminent sepsis risk in less than 12 hours. It really is terrifying.

This, by the way, is my second encounter with the QEUH in as many months. I am very impressed with the speed, friendliness and competence in there, (though not the food, lol!). I know everyone jokes about the 'death star' but sorry, anyone who saves my child's life is all right in my books.
Posted by Phyl at 12:17 pm