Where do we stand today, mum? How close are we to knowing whether we'll need to leave? 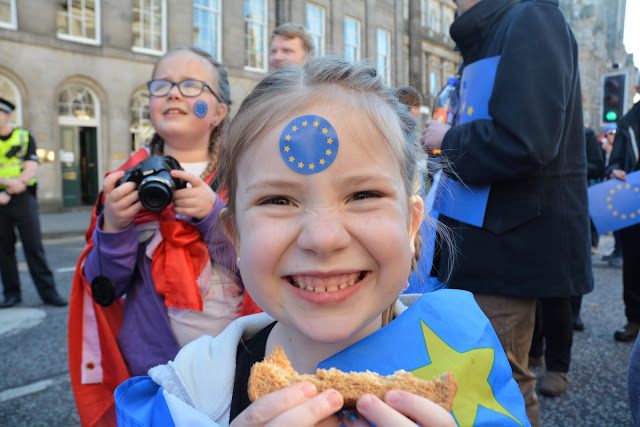 That's what I was asked this morning on the school run by my 11 year old. There was neither fear, nor excitement in his voice, just resignation as he spends another day playing the waiting game...

I expect Leave voters today fall into two categories; those who just want TM to get on with things and ignore all the media hype and expert warnings about imminent economic collapse, or those who feel they were lied to and misled and may have voted differently, had they known the truth.

I also imagine Remain voters, for the most part fall into two categories; those who are resigned to EU withdrawal and feel vaguely sad and those who go through periods of rage when they scream at Twitter and Facebook (or at the TV or radio) whenever the utter incompetence of the UK government is mentioned. These are probably still hoping against hope that sense will prevail and potentially bring down TM's government before all the EU doctors and uni professors leg it to the first available job on the continent, but in between times they get on with their daily lives, they go to work, they go shopping, they go see a movie or whatever.

But there is one further category; those who didn't vote at all. It wasn't that this third group were disinterested, or busy washing their hair that day. Ironically, those who didn't vote were the most affected by the whole thing. Those are the EU UK residents. This means my family and all of those millions of families like mine across the UK... over three million families to be precise. I voted of course, but my husband couldn't vote, he was disenfranchised. He's been here nearly two decades, he's the director of a UK company, he's the father of UK citizens, but he wasn't permitted a say on his family's future. This third group, unlike the first two, doesn't think about Brexit once a week, or even once a day. It doesn't even think about it every time TM or Boris or one of the others says something stupid. This third group breathes Brexit every minute of every day and has done since June 2016 and let me tell you, it's getting awfully tiring.

My husband's status will change, though no one knows what to. Currently the date for this is March 2019 - though that may be longer if a transition agreement is agreed, or shorter of course, if this crazy dictatorial clause whereby Brexit Day is decided by a government minister without consulting parliament (that the HoC voted for the other night) is fully accepted. The conundrum is this: the day he potentially loses his right to live in the UK coincides exactly with the day I lose my right to free movement and therefore my ability to leave the UK permanently with him. So suddenly there is potentially nowhere where a family like ours (and those other 3 million) can legally live together.

This means we've been placed in a situation where we must look at the current state of affairs and decide if it will be safe to stay here or not. And let me tell you - the shambles that is the UK negotiating team is not giving us much to work with at all. We somehow have to find out in advance that Thomas's rights won't change, despite the fact that we are now seeing on a daily basis that EU citizens are being turned down for loans, mortgages, rental agreements, jobs and more. This, of course, isn't legal (yet) but EU citizens are a risky client now so they are best avoided. My mortgage fixed rate is up for renewal in the summer of 2019. If EU citizens are deemed too risky, I will not be able to renew my mortgage (we will be 15 years into our mortgage at that point) as I cannot pay it alone. It, like most mortgages, is based on two earners. So I could lose my home.

There is also talk about fining companies who employ EU citizens rather than UK ones in future. This, of course, will make my husband unemployable, which again means I will lose my home.

There are many other more complex issues being mooted but let's just work with these two, given how huge they are. Let's work backwards from the official date of March 2019 with these two points. If we deem there to be a possibility that these two things go ahead, the last date an EU family can escape the UK is the middle of March 2019. By that date the EU member needs preferably to have found a job abroad and also have sold their UK home and found somewhere to live abroad, so you can't start thinking about it with two weeks to go. When you have children, disrupting them during a school year is not ideal, so the best time to take them out of school is the holiday before March 2019, so preferably the summer of 2018, (or Christmas at a pinch). Assuming you go for summer 2018 as that gives the kids longer to acclimatise to a new country before starting a new school, your house sale and new EU job need to be in place by June 2018, so realistically you need to start looking for them around January 2018. That gives us EU families just three months to find out what is going to happen and at the moment it looks extremely unlikely that we'll know anything at all in three months time.

So if we know nothing by Christmas this year, we are left with the question: do we sit it out and assume the government will finally come to its senses, negotiate something in the country's interest or even call the whole thing off or do we give up everything we've worked our whole adult lives for, disrupt our kids' schooling by pulling them out of a school we know is good and moving them potentially to a country where they don't even know the language, shatter our family in two (because at the very least Marcel needs to finish uni here, and Charlotte is due to start uni in Sept 2018) and start our lives again at the same time as we hit our late 40s/early 50s? Does this government instil the confidence in you that they'll sort out all the issues on the table, diplomatically by this Xmas? I have my doubts.

And that is why we breathe it every minute of every day. That is why many have started leaving already. If this doesn't get sorted in a more serious manner soon, it will be too late for my family, and for many of the other three million like us.
Posted by Phyl at 1:18 pm