I went (once again) to Italy on holiday. Thomas's family lives there so it is our most common destination. As always, straight off the plane I skipped along looking out for vintage Fiat 500s (aka ancient Chuggies, in family speak) and had to stop every time I saw a vast expanse of sunflowers.

Then one day a week or two in, Léon asked the question 'What is your obsession with sunflowers and Chuggies, mum? They are just flowers and cars!' - you can imagine his tone, eleven going on fifteen, deep, newly broken voice oozing a mixture of contempt and boredom! I hadn't really thought about it before, I'd simply always spent my holidays in Italy seeking these two things out... So I lay in bed that night and thought it over - why chuggies and sunflowers?

I hadn't realized till then what an absolutely huge question it actually was.

Let me go over  my encounters with Italy. In 1981, my family went abroad for the first (and only) time in my childhood. We drove to the south of France and used a friend's caravan. Two weeks later we drove back. Our trip there went Glasgow, London, Ramsgate-Calais (on a hovercraft no less!), St Omer, Fontainebleau, Lyon, Aix, to Le Lavandou and the return took me along the coast to Ventimiglia, then Turin, Aosta, through the famous Mont Blanc tunnel to Geneva then a day in Paris and a drive home. I still remember the entire route as it was magical to me. I had dreamt of going abroad so long that when I did (at 13) I took in every sound, every language, the name of every town, the food, the smells, the heat, the dust, everything. I had found my raison d'être. Between that trip and my 18th birthday, I spent a total of 4 weeks abroad - one visiting a German couple I knew, one on a school trip and two meeting my French boyfriend's family. None was spent alone.

Then came the summer of 1986. I was 18 years old. I had worked extra hard in my first year at uni to come top of the Italian class. I wanted to come top because I had heard a rumour that the top student was offered a bursary by the Italian government to study at Perugia uni for the summer. There was no way I could have afforded to go to Italy, pay a room, university fees and food for a summer in Italy but if I just worked hard enough and consistently enough, I knew I was in with a chance. I won the scholarship - but for me it wasn't just a scholarship to learn Italian, it was a scholarship to freedom, to independence, to adventure, to becoming me. I won the money to allow me to leave home for the first time, to have my own flat in an ancient stone building in Perugia, in a house with quaint little red roof tiles and a window I could stare out of at life in a foreign city.  I watched out of my window in Perugia's narrow Via della Viola as the little three-wheeled trucks made their deliveries and the ancient Fiat 500s zoomed past. Of course, they weren't so ancient then - they were old and battered but almost everyone seemed to have one as they were amongst the only cars that could fit up the narrow alleyways.

During these weeks, I studied and I watched the Chuggies from my window. I experienced living alone for the first time, I had my own place, I shared with two Austrian boys. I felt like a grown-up for the first time, doing grown-up things in my own place, alone with my own front door key. All I had was a table, two chairs and a single bed but I can still smell that room if I close my eyes; it was cool, with a marble floor, it was high up in the building but so noisy with the voices of international students passing to go to uni, it vibrated with the low hum vespas and chuggies. It smelled of dry and dusty Italian summer. It smelled of the breathless summer in a city. I remember being 18, lying naked on top of my sheets desperately and unsuccessfully trying to find some cool in the evening breeze to bring me air to breathe, and loving it. I hadn't won a scholarship, I had won the lottery, I had won my life.

The first time I walked into Perugia uni for a class, my jaw dropped in shock - I felt like I'd walked into a Michelangelo painting - frescos on the ceiling and walls - everywhere I looked and many languages around me. There were voices from everywhere in the world, or so it seemed. We had to communicate together in Italian as it was the only common language. I remember in one of the first classes we were asked to describe the seasons in our own country. A black girl sitting beside me said there were no seasons where she came from. Perugia for me was an orgasmic coming of age in the most international place I had ever been and in one of the most beautiful cities I had ever seen. I was growing up and becoming me. I was becoming the me who needed to be surrounded by multiple languages and nationalities always. I was learning to love the south and the heat and the smells in the air of herbs and dried grass and the endless fields of sunflowers that stretched before my eyes every time I set foot in a train to go anywhere from Perugia. The photographer in me walked daily to the edge of the city to wander alone amongst the sunflowers and the bees. I was fascinated by them all standing there in lines, to attention, untouched by wind and rain. The vibrancy that met my eyes overwhelmed me. It still does.

So, Léon, when I run about at a few months off 50 stopping to breathe in the beauty of the sunflowers, I am 18 again and on the edge of a new beginning. When I hear an old Chuggy, I have my whole life ahead of me. I am in a new place at the start of the adventure that would become my life. Going to Perugia made me the woman who had to marry a foreigner, who had to speak multiple languages at home and sunflowers and Chuggies are the very embodiment of 18 year old me. So, love me or leave me, as long as there is a breath in my body, I will hunt out the last remaining Chuggy in Italy and the most vibrant sunflower field I can find. 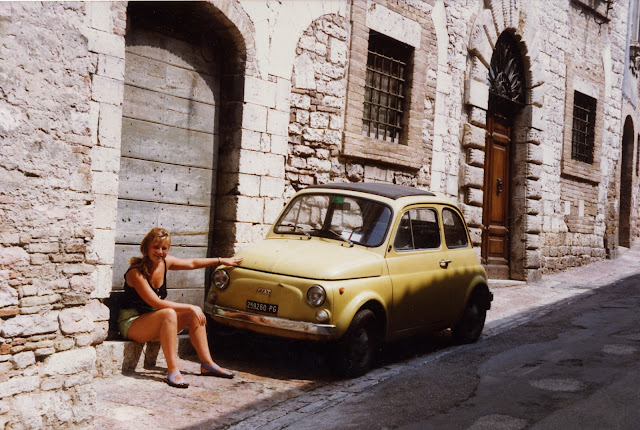 And one day when I'm dead and buried I hope the sight of a chuggy or a sunflower will make you stop and think about me for a minute. Maybe you'll turn to Léon junior at that moment and say: You know what son? Let me tell you how crazy your grandmother was...