When I was a child in the early 70s, growing up in the rather posh Glaswegian suburb of Newton Mearns, we called any carbonated soft drink lemonade - orangeade was a type of lemonade, as was cola. We didn't call them Fanta and and Coke back then. Mum's best friend was bringing her daughter up in the slightly less leafy Glasgow suburb of Glasgow - Castlemilk. Heather and I were the same age. When we entered the chippie at Heather's house I soon learnt that asking for 'orange lemonade' provoked howls of laughter and queries of 'Is this your cousin the snob?' After flooring them on several occasions, I learnt you had to ask for a 'bottle of ginger' and you sure as hell, didn't pronounce the double 't' if you wanted to survive it out the shop alive! I also quickly understood that just as lemonade was a no-no there, mentioning ginger back home made my teachers' eye brows rise and their lips curl in disgust. Newton Mearns back then was a great place to have the Scottish cringe beaten into you (sometimes literally). Gladly, my kids are now less self-conscious here, it is ok to be Scottish now, and they even learn Scots songs and poems at school.

Yesterday I was shopping in ASDA. They had these on special at the checkout. It made me laugh out loud and I just had to buy it for obvious reasons - I expect it tastes bloody awful, but it made me smile anyway! 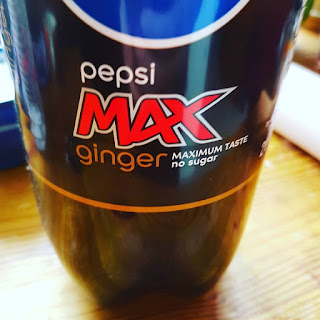