When Charlotte scored her six A grade Highers (English, Maths, Chemistry, History, Spanish and French), I asked her how she wanted to celebrate. Obviously the norm around here is a slap-up meal, driving lessons and a brand new car with a ribbon round it, but she was au fait with our family's latest tiny financial drama... (her estranged father has decided to brexit off out of the country (I don't blame him one bit on that front - I'd have left too if I didn't have the sole responsibility for a bunch of kids I had with him who are being educated here - grrr!)).

The child maintenance service had rung me the day before her exam results to notify me that as he had left the country, they would be closing our case with no notice as they have no authority to force a foreign national living abroad to give me any maintenance payments at all - gulp. The good news was that there is a reciprocal agreement between the UK and France on child maintenance (phew), the bad was that I'd need to take him to court to enforce it (sob)...

Under Scottish law he is liable to provide Marcel with maintenance till he leaves uni and Marcel has just spent over 2 years fighting him through the Scottish legal system (completely unsuccessfully) to enforce it. He runs round and round on the same loop... His dad's lawyer says he's only willing to pay if Marcel works to provide a little for himself too - fair enough - so he gets a job and his dad's lawyer says he is rich enough to pay for himself now so needs no maintenance, he gives up the job, he says he's not trying, he gets a job - yip you guessed it!

So Marcel is desperately trying to do an Honours degree in Law while also working a 20hr week and doing compulsory voluntary work (as part of a scholarship). His room (not his flat, his room!) costs a whopping £550 a month and he has to pay all that himself while all his flatmates have their parents pay between 80 and 100% of their rent. It's hard to express the level of frustration it brings me, knowing Marcel is trying to do well so he can have a great career, while the playing field is far from level. Last year he had five flatmates - four didn't work at all and concentrated only on their studies, one had a one day a week job, Marcel worked all weekend every weekend and from 4-8pm two nights a week, fitting his studies in as best he could, and he even did really well. I'm sure he will succeed as he is a determined boy... man, even, but I can't imagine this is great for his mental well being. He's had to grow up and support himself way too young. Till now Thomas and I have been sending him all his food money at least as a help but now we've no maintenance, Marcel will have to bear the brunt of that too, I suspect. 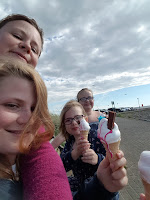 So back to Charlotte. Being a sweet soul, she asked for a 99 at the beach and a walk up to the Irvine dragon. We had a lovely day out - me and the three girls. Well, more accurately they had a lovely day, while I felt guilt and inadequacy mixed in with my bursting pride at her astounding achievement. Even in a high-achieving school she was one of only 3 kids (out of 250) to sit six Highers. And she worked her socks off to get there. She didn't even seem to be upset at her beach trip and ice cream.

Anyway, we'll see how this pans out now. If it turns out we need to move because of the cut in income, that could ironically be the brexit straw that breaks our back too. Maybe we'll be forced to move to France and make a claim there! 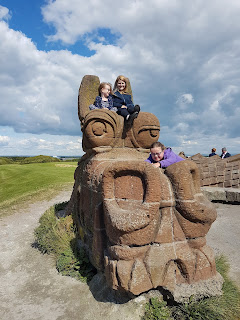 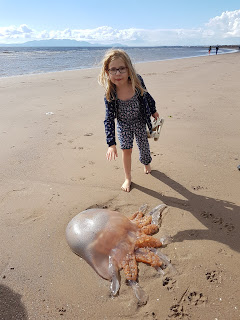 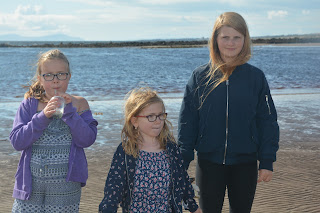