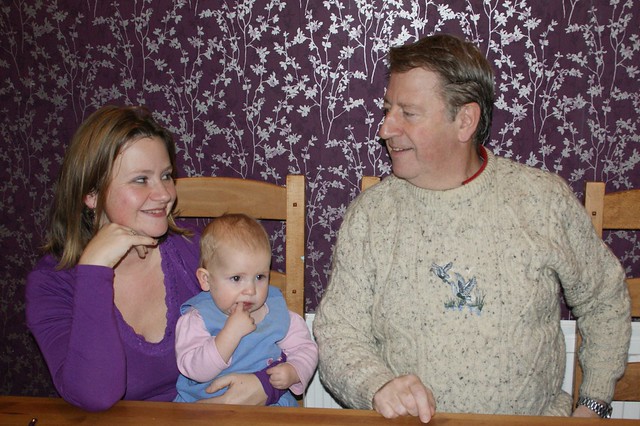 Three years and one hour ago my dad died. It feels like a lifetime ago, and strangely, at the same time, it feels like an hour ago, a minute ago, less. If I close my eyes I can relive every moment of that afternoon.

At the time, I said I'd write about it when I was ready. I expected that'd be after a few days or weeks. With time it has become apparent that I would never be more ready, or less ready.

So today is the anniversary. Do I miss him more today than I did yesterday, or will tomorrow? No. Does the anniversary bring it more to the forefront of my thoughts? Not really. It isn't a calendar date that brings it back, it is life itself, at the most unexpected moments. I get up in the morning and Chris Evans randomly plays a Stevie Wonder track on his breakfast show and I think of him. Each May I see bluebells and I remember his love of the bluebell woods at his golf course. I see men in their 70s dragging their trolleys round the golf course on my school run and I can't help but think that isn't fair. He should still be out there. I read articles by Wee Ginger Dug such as his analysis of last week's election and think this would have made my dad laugh. I'm not even ashamed to admit that when I see old friends wishing their parents a happy 80th on Facebook, I feel that he and we were somehow shortchanged. Why did so many of my friends' parents get to celebrate their 70th birthday when he didn't, so we didn't?

So in the aftermath, life has become a list - a list we add to every day, a list of moments and memories he missed out on. Some are momentous: like the birth of his granddaughter, of course, but even just from my own immediate family's point of view he missed Charlotte taking a stance against her father which led to his three oldest grandchildren changing their lives entirely, and their subsequent name change to Buchanan, which I hope would have blown him away. He missed my son achieving remarkable school results and getting into Edinburgh university. He missed Marcel's trip to India. He missed Charlotte growing up into a strong, clever and beautiful young woman confidently following in her brother's academic footsteps, with a rather different, calmer personality. He even missed seeing her in a dress for her prom. We didn't get to throw him a Golden wedding anniversary party last month, the same month as his friends, because he didn't make that milestone when they did. As I picked my mum up alone that night I watched the hundreds of guests stroll out laughing and smiling and realized that the whole family had missed out on that celebration. Until that night, I had thought of it as something, they had missed out on as a couple without measuring the greater joy that would have been had by it. He wasn't there when my friend died unexpectedly just a few months after he did. He missed Scotland's political awakening. Despite last September's defeat, he'd have enjoyed participating in that, and would still be fighting with us, as it was so dear to his heart. He didn't get to hear Léon learning to play the violin. And the girls were just four and two back then. Now they are clever, confident, capable little girls who would have loved nothing better than a Pumpa hug. Of course, there are the silly things too - we never got to introduce him to our hamsters - he hated cats till we got cats, maybe he'd have been amused by Rosie and Lily! He never got to taste Thomas's homemade wine, or see my little car or photograph the flowers in my garden or simply sit with us and keep our family complete. It's all our fates, of course, but you would have put money on him still being a Pumpa at just 72, wouldn't you?

So every day my heart aches for my mum, who shouldn't be alone and for my kids and Derek's who should still have a grandfather, and a little for us too - I miss sharing our life with him.
Posted by Phyl at 3:48 pm