Léon is a fascinating soul 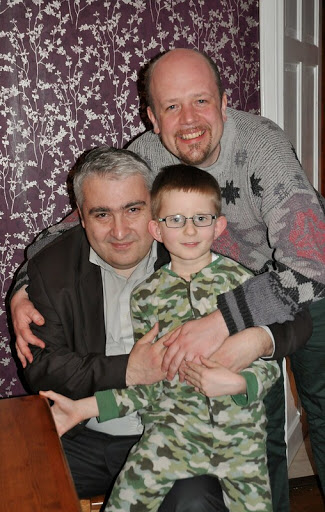 Léon has been fascinated by all things foreign since before I can remember. His ear for phonetics in Danish and French have always been surprising even before he couldn't read or write. He would point out nuances of sounds that even I found barely perceptible.

He has also always been drawn to languages he doesn't understand. He loved the sound of Italian the first time we visited Thomas's parents in Italy and was desperate to learn what the villagers were saying.

This last week has taken that to a new level. Thomas's friend Kakha was here visiting from Georgia. Eighty percent of the conversation for the week took place in Norwegian, with about ten in English and ten in Georgian for good measure.

One evening I came in to find Léon sitting contentedly at the dining table taking everything in. He was then able to explain to me in great detail the ways in which Norwegian distorted the Danish words he was used to and how he could then guess from context what the words that differed in Norwegian must mean. Given his knowledge of Danish is much more spoken than written, drawing the parallels between the two languages is harder than it would be if you were a fluent reader of Danish so I have to say I was impressed. But not only impressed with his understanding, also by the look of contentment such an exercise gave him.

He just loved having someone so exotic to brighten up his mundane Scottish winter. It's been such a long time since anyone has stayed that he was becoming quite fed up and this has definitely perked him up. He's too sociable a wee guy to make do with just his six cohabitants!

His reaction to a week of Norwegian reminded me of the time, as a child, I found a bottle of shampoo in a campsite shower. Its label was written in Dutch. I sneaked back to my tent with it hidden in my jacket as if it was a precious treasure. I was drawn to the exotic too as a small child. I remember reading and rereading it trying to make out what meant what. I couldn't have been more than nine or ten.

I definitely think Léon is a chip off the old block, though he is growing up in an international enough house to hopefully satisfy some of his curiosity. When Kakha left, Léon was very sad. If he could have his way, he'd have a different foreign-speaking guest stay with us every other week.

I must try to find out if there are any lucrative niches for linguists before he gets to uni age - because I'm not sure he'll want to become Complexli's third member of staff one day!
Posted by Phyl at 12:49 am