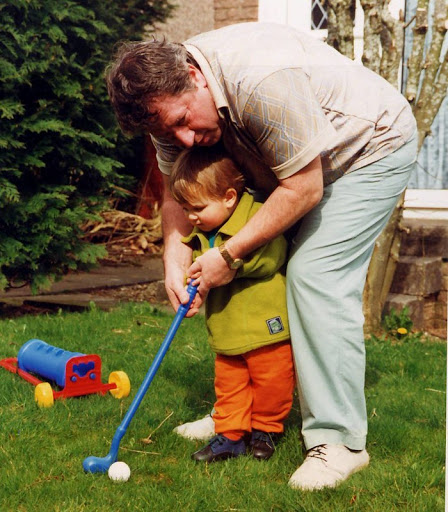 It must be a man thing... that need they have to take you through their sporting exploits...

Dad used to come in here two or three times a week and he'd start 'I was playing with Stevie today - hit the ball 300 yards at least but it veered off to the left... I won four and three' (or was it three and four...?) On and on I'd be given a blow by blow description of each match. The problem was I didn't stop and ask what it meant the first few times and by a few years in it was a bit embarrassing to do so, so I am not sure I ever fully understood what he was on about.

Marcel has started it too recently. His year has started arranging football matches against the 6th years after school on Fridays. He comes in a takes Lots and I through every minute of the match - who marked who, who missed a shot and with which foot, the final score, the angle his shot entered the goal and which corner - yawn, yaaawwwn!

I am so pleased I seem to have married a man who feels no such need!
Posted by Phyl at 9:45 pm