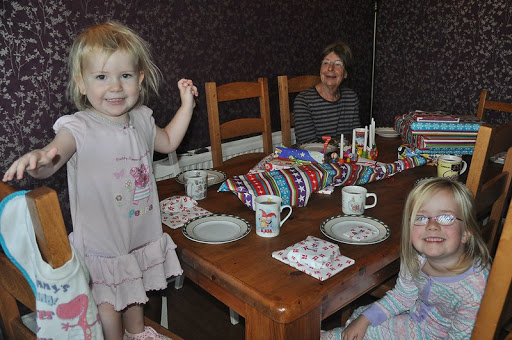 Thomas's mum can recount amazingly detailed memories from when she was an infant. She remembers being fed before she could speak and feeling distressed at being unable to explain when she was full.

I'm not sure if Anna or Amaia can remember their babyhood but they both definitely seem to have inherited traits from their grandmother.

Anna described to me in detail recently how she broke her leg at the age of two, which leg it was and what colour of tights I put over the cast to protect it. She also told me about a trip to Copenhagen zoo with her cousin Ursula which also took place when she was two. As I was not with her there are no photos of the event to jog her memory either. As for Italy, which she hasn't seen since she was four, she can describe it in great detail. Yesterday she was telling me all about the neighbour, Margaret's plunge pool, its depth and the float she used and how she had been scared of the wasps the water seemed to attract.

Amaia too has very strong visual memories of being two. She often points at lucozade bottles even today and says 'Pumpa's drink', despite the fact that he died when she was two. She uses the word 'yesterday' to mean at any time in the past so I'm often thrown when she starts telling me about 'yesterday' until she fills in the details that pinpoint the event as being one or two years ago. She's particularly good at remembering what she wore on specific occasions, or what she ate.

It's funny which genes kids seem to inherit.
Posted by Phyl at 12:07 am