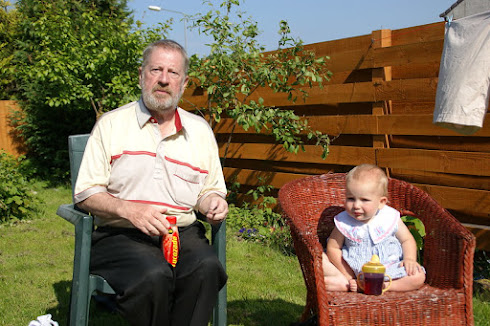 For the last nearly two years of dad's life, as a result of his cancer, he always had a bottle of lucozade in his hand, wherever he went. As long as I live, I will probably associate the small lucozade bottles with dad. 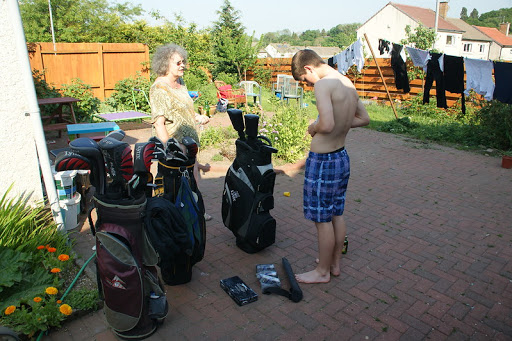 Last night mum turned up with dad's golf clubs. Marcel had been taught golf by dad so was getting his clubs.
Dad's final illness, the perforated ulcer, was fairly sudden and took hold only two weeks after his last game of golf. As Marcel emptied the bags to see what they contained, he found a half-drunk bottle of lucozade. It seemed quite poignant when he took it out, but we got on with looking through them and once he had repacked the bags, he left the bottle on my patio in front of the garden chairs as dad had often done himself last summer and even this year in March. We then followed the sun round to the front garden for dinner and afterwards weren't round the back so forgot about it.

This morning I found Amaia practically dancing in the living room, singing Pumpa's here! Pumpa's here! Pumpa where are you? I followed her eyes - she was looking out the patio door - of course fixated by the bottle. She's only two - all her life, Pumpa had lucozade. She's too old not to be aware of his absence but too young to have any concept of where he is. She's in a strange limbo that would truly break your heart sometimes.
Posted by Phyl at 2:41 pm

That is profoundly moving. I experienced a similar situation 12 years ago when my dad died in his late fifties. My then two year old daughter when visiting my mum's house would look everywhere for my dad.

Your post brought a tear back to my eye when I read it.