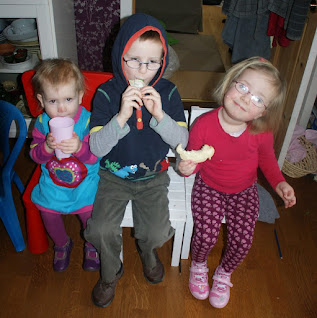 Thomas and I were discussing internationality today - how to make your kids bilingual and also bi-cultural. Bilingual, we have succeeded with, given we both have language backgrounds so know what we are doing but bi-cultural is more bitty. Thomas was complaining how hard it is to give the kids, particularly the three wee ones a real insight into Danishness simply because we never, or almost never, go to Denmark now we have nowhere to stay and we also have very few visits from Danes.
He was saying how some things are more important than others - he'd like the kids to be aware, for example, of what Danes expect to receive when they order a hot dog. You get all sorts of relishes on a Danish hot dog and they'd consider it half-cooked if it was presented naked in a bun like the ones you get here at Ikea, for example.
Given he's a republican (not in the American sense I hasten to add!) I teased him that not a single ones of our kids could pick the Danish Queen out of a line-up of septuagenarians. But would they know how to, if they were mono-cultural Danes living in Denmark? Of course, we concluded... they'd have picked it up from media and other external sources... But in retrospect, I think we were maybe wrong. Just an hour later this came on the news. I asked Léon who the man was and he replied 'a weather man?' I guess culture sometimes depends on who you live with more than where you live!
Posted by Phyl at 8:43 pm