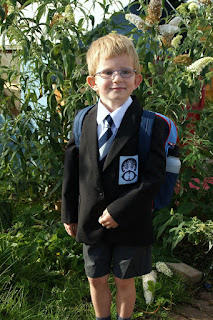 For years I've been ranting about UK school uniforms. My kids' primary has always advocated the polo shirt and sweat shirt option, and although the shirt, tie and blazer that would have been worn when I was a child is still available, only one or two children in each class tend to wear it. Personally I would go further, introducing that in high school (why on earth do girls wear ties in high school?) And what's wrong with jeans or a skirt with it all, like Anna wears to nursery with her polo and sweat shirt? Scotland is grey enough without forcing them to dress in grey (or black) for 13 years!

Occasionally as a small child has passed me in a blazer and tie, I have felt sorry for him or her. I've mentally blamed their parent for wanting to dress the poor wee bugger in such a ridiculous manner. But I hadn't ever considered it could be the child's idea... not until half way through primary one when Léon started his campaign to get me to dress him smartly. He begged and begged for a blazer and tie. Originally I managed to stall him by telling him the school was designing a new tie for its 50th anniversary so their would be no point in buying the old one, but as that project was delayed until later this year, he would no longer be pacified and insisted starting p2 in the smart uniform.

I turned up the first day expecting him to come out with his shirt untucked in a real mess as he's never overly neat and tidy in his usual uniform but he exited as pristine as he had entered, and moreover extremely proud. He is a little boy who never ceases to surprise me!
Posted by Phyl at 11:58 pm