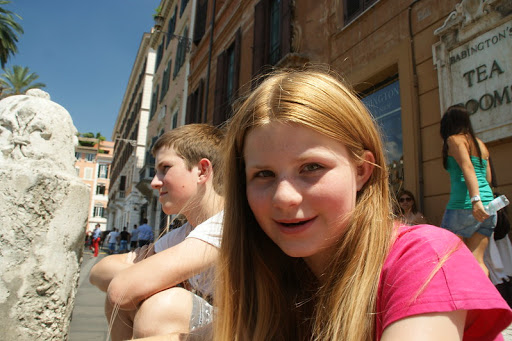 On Monday I was in Rome with Thomas and my two oldest kids. We only had one day to see things so we decided to run quickly round the main sights.
At the Vatican, while Charlotte was looking somewhere between appalled and surprised by the number of nuns you could possibly see in one day, we noticed many of the tourists were buying postcards and sending them with special Vatican stamps as it is a separate state. Marcel suggested sending a pc to his French grandmother as she's catholic. He bought a stamp and card. He stood fiddling with the stamp looking perplexed.
What's the problem? I asked. I can't get the back off it, he replied.
I pointed out that you lick stamps and they stick on the card. He genuinely had no idea! While we were laughing and ridiculing him, Charlotte jumped to his defence with the wonderful phrase: I don't know how to work a stamp either! He then asked which side of the card you wrote the address on! He was 14 last week! It turned out he had never sent a card or letter before in his life. At 14 I had twenty penpals and collected stamps. How things can change in a generation! Remind me not to apply for a job with the Royal Mail if that is the way things are going!
Posted by Phyl at 12:32 pm