THE END OF THE BELLING SAGA! 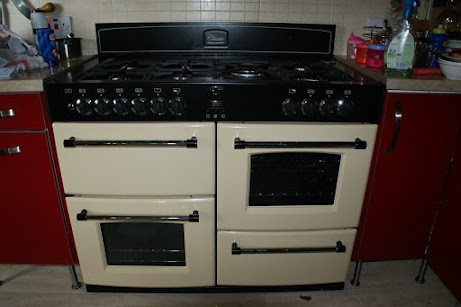 I know you've all been waiting for the next instalment of my Belling cooker saga.

No, they didn't send another wrong fascia, no Jake, Jack and Robert didn't drop by but we have definitely had a result!

Jack turned up without a new fascia on the right day - the first time any Belling engineer has turned up on the right day (they are usually up to two weeks early). He looked at the 16 doors we have in the garage, and 3 fascia panels and concluded he really couldn't be bothered with us any more so phoned Belling and told them to authorize replacing our cooker! I was out on the school run and came home to a job number and a phone number for a Sammy Davis (!? was this a joke?) who would arrange it for me. Not only did Sammy turn out not to be a one-eyed, black Jew, he turned out to be a she! But she replaced my three year old cooker, which was out of warranty, with and brand new model because she couldn't find a replacement fascia, when in fact it was the door that had broken all along, and they'd already fixed that!

I am puzzled, amazed and feeling somewhat jammy :-)

I had to laugh, when an hour after it arrived the company I had bought it from originally phoned and tried to sell me an extended warranty for just £7-50 a month... why on earth would I need that when all it takes is the charm and patience to spend two months on the phone to them to get a new one completely without a warranty!?
Posted by Phyl at 12:19 am