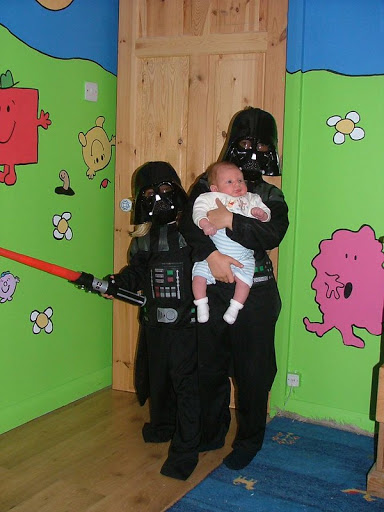 We were discussing the census with my in-laws over dinner the other night. Given they are both foreign and both qualified ministers of religion, they looked quite horrified when we explained the great British Jedi faith joke of the last census. Marcel and Lots, of course were little more than babies at the last one so asked with great interest about it. We explained about people with no religion, or maybe a lapsed one giving Jedi. Marcel chuckled and asked to be filled in as that, given he is unchristened, despite not being overly interested in Star Wars now he's 13. Charlotte looked more serious. She often finds others' humour more difficult to fathom, in a vaguely autisitc manner. I asked if she wanted to be a Jedi too. She thought about it for a moment then replied even more seriously - No put me down as 'Sith'. Should I be worried?
Posted by Phyl at 11:31 am

Eh, Sith LORD if you please !!