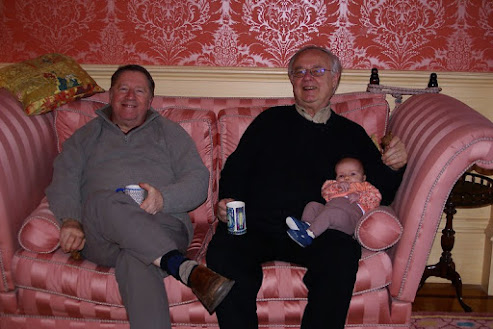 Here is a photo of Anna with her two grandfathers. She calls my dad Pumpa, a family word invented by Marcel about 12 years ago, and Peter Großvater because he's German. Up till about three weeks ago, that was that. Then suddenly for some reason, perhaps because she has no one she officially calls Grandpa, she decided to invent one. I was driving home from nursery when she first mentioned Grandpa: My Grandpa likes to play tennis, she announced. I asked if she meant dad or Peter but she said she was talking about her Grandpa. After that we have had a piece of random information divulged daily about this grandpa. He has green hair, he likes beans, he has a bum at the front and a tail, he likes to go to the park, he bakes cakes, he sometimes wears skirts, he can hide in her sock drawer, his car is pink, he likes to ballet-dance with Anna and so on. And when I ask who she means by grandpa, she sometimes looks at me as if I'm the one who's daft and says You know, my pretend one!

I wonder if it is normal for your three year old daughter's imaginary friend to be a rather eccentric elderly gentleman!

Hey !! Enough of the "elderly" thanks very much !!

Today she announced her Grandpa would be blowing out candles because it was his birthday. I asked if he was old and she said 'Yes, he's 5!'