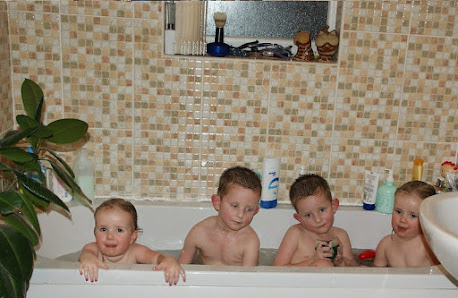 I haven't played at cloning since Léon was a baby. Last night while sitting with the kids editing some photos I noticed I had taken three photos in the bath which lent themselves to a quick cloning job. Once I was done I showed the photo to Léon and Anna. Who's that? I asked. Léon looked along the line Anna, Gordy?, me and Amaia? He asked, dubious. No, look, that's not Amaia! I pointed out. He looked even more puzzled and ventured Charlotte? When I asked him which of the Léons was Léon he was dumbstruck. Eventually I explained it was Anna, Léon, Léon and Anna. I asked if he remembered me taking it. He was utterly speechless. Eventually after a few hours he asked if the whole thing might have something to do with scissors and glue! Finally his brain was starting to comprehend it was a trick photo, but it took a while.
Posted by Phyl at 1:45 pm