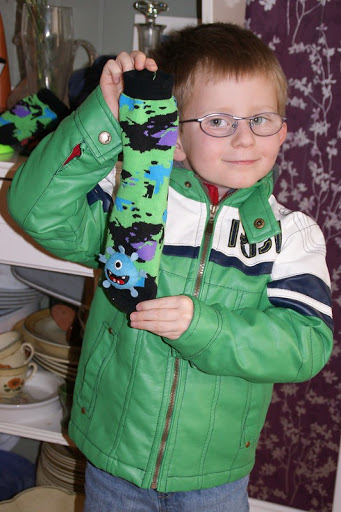 I was in town on Saturday and Léon was moaning that he didn't have slipper socks like those I'd bought his sisters last week. Given they are only £1.50, I promised him a pair. He is given to imagination and lives in his own fantasy world at times but there was one side effect I simply could not have foreseen. As soon as he put them on, he informed me that the monsters on the front of the socks were tidy monsters and were appalled at the mess in the house. He told me they wanted to tidy up the toys that were lying around. He picked up all the toys in the dining room. I figured he'd run out of steam soon enough but half an hour later I heard him telling Marcel to lift his feet in the TV room, next the kitchen, living room and hall were blitzed. At lunch time I thought he'd gone missing till he was seen backing out of my bedroom with a broom in his hand!! It was too good to be true. His own room was next, then I heard him shouting at both Marcel and Lots to let him in to their bedrooms! I was speechless by the time he forced Thomas upstairs into his office and kept him there for half an hour! After that the monsters were satisfied, so it looks like I've been left with two halls and all the bathrooms to do myself but on the balance I am defintely liking his £1-50 socks quite a lot!!!!
Posted by Phyl at 11:39 pm