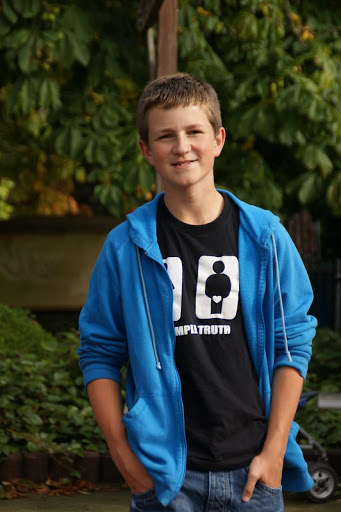 You don't expect to pick up the phone and hear your son say 'Mum, I was shot while walking past ASDA at 4 o'clock with my friend', do you? I could tell from his phone voice, he was ok, so wondered if he thought this was some sort of amusing joke, but that would be out of character as he's turned into quite a sensitive and sensible young man so I asked what he was on about. It turned out that after he'd left my house at 3-30pm on Friday on a bus to the Kirkhill area of Newton Mearns, he met up with his good friend Jack as he was to have dinner there and together they had walked to ASDA around 4pm to buy some drinks and snacks. Walking back from ASDA to Jack's house along Eaglesham road, Marcel said a blue car (which they didn't know) had driven up beside them, and slowed down, rolled down the window pulled out a 'BB gun' and fired off six shots, hitting Marcel in the shoulder with one. Though he was dressed as in this photo, the pellet went through his jacket and t-shirt marking his left shoulder. Stunned, neither boy managed to note down the numberplate of the car. Fortunately Jack's dad is himself a police officer so knew exactly what to do. Three cars were called out and took statements and looked at Marcel's superficial wound. Jack's dad then rang me to recount what had happened. Shockingly, Jack's dad, who works in the West End told me of the easy availability of such pistols, grenades and the likes and the problem all over the UK (and presumably the Western world) of kids freely buying what they consider fun-guns on the Internet - free delivery, no questions asked - and thinking such seemingly non-dangerous attacks were a way to relieve boredom, not realizing that hitting 30cm further up in his eye would have resulted in quite a different injury. He told me he regularly arrests kids in town on a Saturday night carrying such weapons, but was himself more than surprised to find 13 year old kids being singled out at 4pm on an autumn day for a drive-by shooting in a quiet and affluent area of the city. Did these crazy attackers realize how young these children are or were they singled out as acceptable targets because Marcel's height makes him look older than his age. Whatever the thoughts behind this, I'm absolutely appalled anyone can bring up a child to believe this behaviour is acceptable. And I thank my lucky stars neither Marcel nor Jack was really hurt in this incident.
Posted by Phyl at 9:58 pm

Absolutely out of order .,., Tell M to keep his eyes peeled for this bastard's car and note the number this time.
I'd like to serve up some rough justice !!