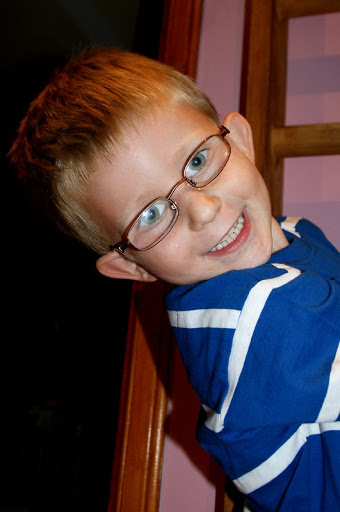 Nearly two weeks after getting glasses we still have a way to go. Firstly I might as well record the phrase 'Look through your glasses Léon, not under them!' and play it on a continuous loop. I then ask if he doesn't see very well through them and he claims he sees much better through them. So why the hell does he look under them non-stop? I am completely baffled. Then there's the contrast between what an adult would consider to be a safe place and Léon's interpretation of the same. While dressing yesterday morning I suggested he should take them off and put them somewhere safe. He proceeded to take them off and simply drop them onto the wooden floor from the height of his face. Arg! They didn't smash - phew! Today, he asked to join me in the bath. I asked him to put them somewhere safe again and he decided that placing them carefully on the floor in front of bath was a 'safe place'. I guess he's still learning... I just hope the glasses last until he's learnt.
Posted by Phyl at 12:00 am