At Easter we spent a night at Thomas's sister's house. That meant leaving Nacho in the house overnight alone. We weren't going to be there long enough to check him into his usual cat hotel, so left loads of food and water and toys, but still we felt guilty. Back when we got Nacho, we had had the option of taking his brother too. Amaia was really not sure about cats back then so we weren't sure two wouldn't be too much for a kid who was scared of animals. We should have known better. After a fortnight, Amaia had come round and regret was setting in. This overnight though made us realise how it would be easier going forward to leave him if he had a wee friend, or a sibling. The search began, scouring most of Denmark for kittens in need of rescuing or rehoming. We found a litter two hours away but they were too young to leave their mum so we've been getting updates for about six weeks now until last Saturday when we could finally bring her home.
We decided to name her Samosa - as it was another orangey-coloured triangular snack food like Nacho and she too had quite a lot of ginger in her. I have decided single-handedly that her middle name is Friday as she looks like the kind of cat who could only have been assembled last thing on a Friday - Orange legs, white feet, a half grey, half orange face, a long tail that doesn't fit with the rest, and better still it turns out she was born on a Friday!
It's day three and they are already chasing each other in a non-agressive manner round the house and stealing each other's food, so things are looking positive. Hopefully there will be many updates on here going forward! 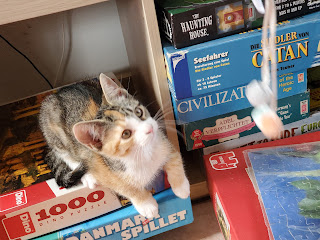 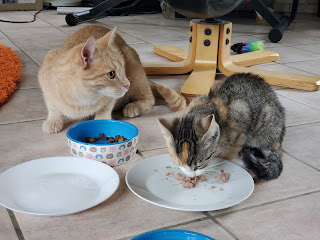